A New Subspecies of the Fruit-eating Bat, Sturnira ludovici, From Western Mexico 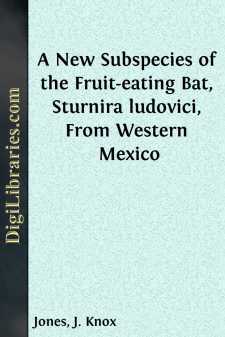 The fruit-eating bats of the genus Sturnira are represented on the North American mainland by two species, S. lilium and S. ludovici. The former, in most areas the smaller of the two, is widely distributed in México and Central America and is common in many places. On the other hand, S. ludovici, described by Anthony (1924:8) from near Gualea, Ecuador, generally has been regarded as rare; insofar as we can determine only 20 specimens of the species have been recorded previously from North America (Costa Rica, Honduras, and México).

In 1961 (M. Raymond Lee) and 1962 (Percy L. Clifton), field representatives of the Museum of Natural History collected mammals in western México. Among the bats obtained by them were 23 specimens of S. ludovici, which represent an heretofore undetected subspecies that is named and described below.

Comparisons.—From Sturnira ludovici ludovici, the only other subspecies of the species, S. l. occidentalis differs in averaging smaller in most external and cranial dimensions (in some measurements the upper size limits of occidentalis barely overlap the lower limits in specimens of ludovici examined), in having a relatively broader skull with a shorter, more abruptly elevated rostrum, and in being paler both dorsally and ventrally.

From Sturnira lilium parvidens, with which it is sympatric, S. l. occidentalis usually (but not always) differs in being brownish (rather than yellowish to yellowish orange) dorsally and in lacking epaulets, and differs in the following cranial features: first upper incisors simple (rather than weakly bifid in unworn condition), larger, and more nearly straight when viewed from the front; second upper incisors reduced; lower incisors bilobate rather than trilobate; lingual cusps on m1 and m2 greatly reduced; M2 usually turned inward from M1 at distinct angle. The two species have approximately the same external and cranial dimensions in western México.

Cranial measurements of the holotype additional to those given in Table 1 are: condyloincisive length, 19.7; breadth across upper canines, 5.5; length of mandibular tooth-row (c-m3), 6.7.

Remarks.—The pattern of geographic variation in size in Sturnira ludovici resembles that in many other species of tropical bats in North America in that individuals from the northern parts of the range are smaller than those from the south....