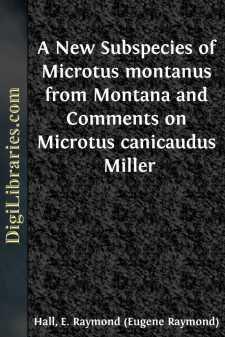 IN 1949, for the Museum of Natural History of the University of Kansas, Mr. John A. White collected two specimens of the species Microtus montanus in the Bitterroot Valley of Montana, that did not fit the description of any named subspecies. These were laid aside until we could examine the additional specimens from Montana in the Biological Surveys collection in the United States National Museum, some of which previously had been reported by Bailey (N. Amer. Fauna, 17:31, June 6, 1900) under the name Microtus nanus canescens Bailey [=Microtus montanus canescens]. Our examination reveals that the animals from the Bitterroot and Flathead valleys belong to an heretofore unrecognized subspecies which is named and described below.

Remarks.—Northwardly in the Bitterroot Valley, specimens of M. m. pratincolus morphologically approach M. m. nanus, especially in the reduced degree of inflation of the tympanic portion of the bullae. On geographic grounds we think that the geographic range of M. m. pratincolus extends southward to the southern end of the Bitterroot Valley; we have not seen specimens from that area. Although we have not examined the specimen reported upon by Davis (Murrelet, 18:26, September 4, 1937) from Canyon Creek, "a few miles west of Hamilton", Montana, we think that it will be found to belong to M....