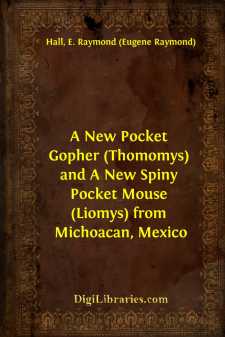 A series of 17 pocket gophers of the species Thomomys umbrinus obtained in 1943 from points 3, 4 and 5 miles south of Pátzcuaro proves upon comparison to be an hitherto unrecognized subspecies which is described and named as follows:

Range.—Known only from 3 to 5 miles south of Pátzcuaro, Michoacán.

Figs. 1-3. Three views of the skull of the type specimen of Thomomys umbrinus pullus. × 1.

Remarks.—Among named subspecies of Thomomys umbrinus, T. u. pullus most closely resembles T. u. supernus, the subspecies next adjacent to the northward. Therefore, the results of comparisons with only that subspecies are here reported upon. T. u. tolucae to the eastward is for one thing a much larger animal and has slightly less procumbent upper incisors. So far as we know, Thomomys umbrinus has not heretofore been reported from Michoacán. Of our seventeen skins, eight are brown, six are black and two are intermediate in color.

Most of these pocket gophers lived where there was a good growth of pine trees in the same areas where large pocket gophers of the species Cratogeomys gymnurus occurred. The field notes of the collector of the type of T. u. pullus record that when he was making a shallow excavation to reveal the gopher burrow in which he trapped the holotype, he found the burrow approximately five inches below the surface of the ground and that in digging deeper than was necessary he accidentally broke into the burrow of a Cratogeomys. Another member of our field party (E. R. Hall) when removing from its burrow a trapped Thomomys that was caught only by the hind leg, dug around the animal whose burrow was approximately six inches underground and in doing so he also broke through the roof of a burrow of Cratogeomys....