A New Name for the Mexican Red Bat 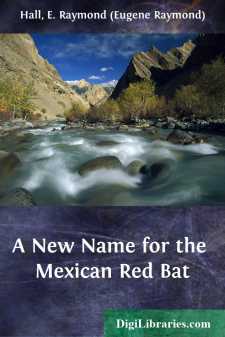 When Gerrit S. Miller, Jr., published his "Revision of the North American Bats of the Family Vespertilionidae" (N. Amer. Fauna, 13:1-140, 3 pls., 39 figs. in text, October 16, 1897), the red bat, Lasiurus borealis, was known from the southern half of Mexico but he did not know that the hoary bat, Lasiurus cinereus, also occurred there. Therefore, the name A[talapha]. mexicana Saussure (Revue et magasin de zoologie, 13 (ser. 2): 97, March, 1861) that clearly pertained to a lasiurine bat, almost certainly from southern Mexico, was applied by Miller (op. cit.: 111) to the red bat as a subspecific name. Subsequently, the hoary bat, Lasiurus cinereus cinereus (Beauvois 1796), was shown to occur in southern Mexico. For example, an adult male L. c. cinereus was obtained on May 6, 1945, by W. H. Burt from the Barranca Seca in the State of Michoacán (see Hall and Villa, Univ. Kansas Publ., Mus. Nat. Hist., 1:445, December 27, 1949). Because two, instead of only one, species of Lasiurus are now known to occur in the general part of Mexico visited by Saussure, it has seemed desirable to re-examine the application of the name A[talapha]. mexicana Saussure which that naturalist proposed along with a description as follows:

A. mexicana Valida. Molar teeth 4/5. Head and throat with a tendency toward fulvous, mouth and chin dark. Ears small and rounded, black, exterior at the base dark and hairy, interior with the anterior margin and an area in the middle yellow-haired. Back chestnut, above [hairs apically] grayish, below [hairs lower down] reddish, everywhere marbled with white. Tibiae, feet and the femoral patagium reddish marbled with white. Venter dusky-gray, with hairs at the apex and on the breast whitish, on the abdomen with tendency toward fulvous. White spot on humerus. Wings black; underneath the arm and the superior half of the wing yellow-haired. Above [on the upper side] with three whitish spots on the base of the thumb and fifth finger situated in the angle of the elbow.—Forearm length 53 mm. [Above is translation from the Latin original.]

As may be readily seen by comparing specimens of L. borealis and L. cinereus from Mexico (or also from any place in North America north of Mexico), the description by Saussure applies to the hoary bat (Lasiurus cinereus) and not to the red bat (Lasiurus borealis).

Accordingly, the name A[talapha]. mexicana Saussure 1861 falls as a synonym of Lasiurus cinereus cinereus (Beauvois 1796); if the hoary bat of the southern end of the Mexican table land should prove to be subspecifically separable, the name Lasiurus cinereus mexicanus would be available for it.

The Mexican red bat, thus, is left without a name, and for it I propose

Diagnosis.—Resembles Lasiurus borealis teliotis (H. Allen) but feet, interfemoral membrane, and under side of wings much less hairy.

Comparisons.—From L. b. teliotis, which occurs to the northwest, L. b. ornatus differs in the restricted peripheral distribution of the fur (see Miller, N. Amer. Fauna, 13:112, October 16, 1897). From Lasiurus borealis frantzii (Peters), which occurs to the southward, L. b. ornatus differs in longer forearm (41 versus 37); upper parts lighter rufescent or chestnut, the back being only lightly overlaid with this color; underparts washed with lighter buff, the basal tone plumbeous, instead of blackish; skull larger (see Goldman, Proc. Biol. Soc. Washington, 45:148, September 9, 1932).