A Narrative of the Life of Rev. Noah Davis, A Colored Man Written by Himself, At The Age of Fifty-Four 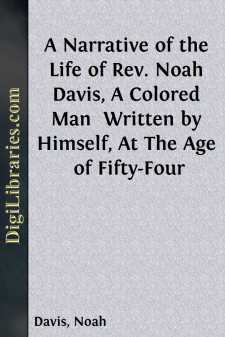 CHAPTER I. Early Life in Virginia--Example of Pious Parents.

I was born a slave, in Madison county, Virginia, March, 1804. My father, John Davis, and his family, belonged to Robert Patten, Esq., a wealthy merchant, residing in Fredericksburg--who was also owner, in connection with Mr. John Thom, of a large merchant mill, located on "Crooked Run," a stream running between Madison and Culpepper counties. My father was the head miller in that large establishment, in which responsible station he was much respected.

There I was born, and remained until I was twelve years old. Mr. Patten was always considered one of the best of masters, allowing his servants many privileges; but my father enjoyed more than many others. Both he and my mother were pious members of a Baptist church, and from their godly example, I formed a determination, before I had reached my twelfth year, that if I was spared to become a man, I would try to be as good as my parents. My father could read a little, and make figures, but could scarcely write at all. His custom, on those Sabbaths when we remained at home, was to spend his time in instructing his children, or the neighboring servants, out of a New Testament, sent him from Fredericksburg by one of his older sons. I fancy I can see him now, sitting under his bush arbor, reading that precious book to many attentive hearers around him.

Such was the esteem I had for my pious father, that I have kept that blessed book ever since his death, for his sake; and it was the first New Testament I read, after I felt the pardoning love of God in my soul.

My father died, August 20, 1826, aged 60 years. My mother, Jane Davis, at the death of my father, removed from the farm, where my father died, and spent the remainder of her days in Fredericksburg, with her children. She lived to good old age, and fell asleep in Jesus, Dec. 24, 1831.

My father had been allowed to keep a cow and horse, for his own use; and to raise and feed his hogs and poultry from the mill. He had the privilege of keeping his children with him, until they were old enough to put out to such trades as they might choose. I had several brothers and one sister. Two of my brothers, one older, the other younger than myself, lived with our parents, at this place. My oldest brother worked in the mill, with my father, while my youngest brother and I did little else than play about home, and wait upon our mother. I had several playmates, besides my brothers, and among them were the sons of Col. Thom, and the servant boys who stayed at his house. Although many years have passed away since, it gives me pleasure, even now, to recollect the happy seasons I enjoyed with the playmates of my childhood.

But this pleasant state of things was not to continue long. The owners of the mill and farm concluded to sell out the whole concern. My father and his family then removed to another farm, belonging to our owner, located in Culpepper county, near Stevensburg. Here I remained nearly two years, working, part of the time, with a carpenter, who was building a summer residence for my master; and the rest of the time, assisting my father to cultivate as much ground as he and his family could tend....