A Narrative of the Expedition to Botany-Bay 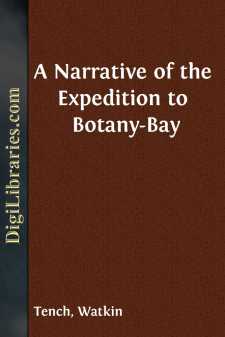 CHAPTER I From the Embarkation of the Convicts, to the Departure of the Ships from England.

The marines and convicts having been previously embarked in the River, at Portsmouth, and Plymouth, the whole fleet destined for the expedition rendezvoused at the Mother Bank, on the 16th of March 1787, and remained there until the 13th of May following. In this period, excepting a slight appearance of contagion in one of the transports, the ships were universally healthy, and the prisoners in high spirits. Few complaints or lamentations were to be heard among them, and an ardent wish for the hour of departure seemed generally to prevail.

As the reputation, equally with the safety of the officers and soldiers appointed to guard the convicts, consisted in maintaining due subordination, an opportunity was taken, immediately on their being embarked, to convince them, in the most pointed terms, that any attempt on their side, either to contest the command, or to force their escape, should be punished with instant death; orders to this effect were given to the centinels in their presence; happily, however, for all parties, there occurred not any instance in which there was occasion to have recourse to so desperate a measure; the behavior of the convicts being in general humble, submissive, and regular: indeed I should feel myself wanting in justice to those unfortunate men, were I not to bear this public testimony of the sobriety and decency of their conduct.

Unpleasant as a state of inactivity and delay for many weeks appeared to us, it was not without its advantages; for by means of it we were enabled to establish necessary regulations among the convicts, and to adopt such a system of defence, as left us little to Apprehend for our own security, in case a spirit of madness and desperation had hurried them on to attempt our destruction.

Among many other troublesome parts of duty which the service we were engaged on required, the inspection of all letters brought to, or sent from the ships, was not one of the least tiresome and disagreeable. The number and contents of those in the vessel I was embarked in, frequently surprised me very much; they varied according to the dispositions of the writers: but their constant language was, an apprehension of the impracticability of returning home, the dread of a sickly passage, and the fearful prospect of a distant and barbarous country. But this apparent despondency proceeded in few instances from sentiment. With too many it was, doubtless, an artifice to awaken compassion, and call forth relief; the correspondence invariably ending in a petition for money and tobacco. Perhaps a want of the latter, which is considered a great luxury by its admirers among the lower classes of life, might be the more severely felt, from their being debarred in all cases whatever, sickness excepted, the use of spirituous liquors.

It may be thought proper for me to mention, that during our stay at the Mother Bank, the soldiers and convicts were indiscriminately served with fresh beef....