A Monograph on the Sub-class Cirripedia With Figures of all the Species. 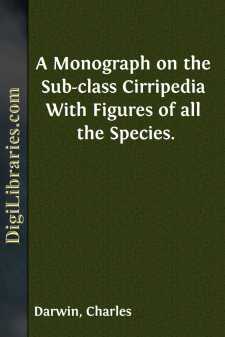 My duty, in acknowledging the great obligations under which I lie to many naturalists, affords me most sincere pleasure. I had originally intended to have described only a single abnormal Cirripede, from the shores of South America, and was led, for the sake of comparison, to examine the internal parts of as many genera as I could procure. Under these circumstances, Mr. J. E. Gray, in the most disinterested manner, suggested to me making a Monograph on the entire class, although he himself had already collected materials for this same object. Furthermore, Mr. Gray most kindly gave me his strong support, when I applied to the Trustees of the British Museum for the use of the public collection; and I here most respectfully beg to offer my grateful acknowledgments to the Trustees, for their most liberal and unfettered permission of examining, and when necessary, disarticulating the specimens in the magnificent collection of Cirripedes, commenced by Dr. Leach, and steadily added to, during many years, by Mr. Gray. Considering the difficulty in determining the species in this class, had it not been for this most liberal permission by the Trustees, the public collection would have been of no use to me, or to any other naturalist, in systematically classifying the Cirripedes.

Previously to Mr. Gray suggesting to me the present Monograph, Mr. Stutchbury, of Bristol, had offered to intrust to me his truly beautiful collection, the fruit of many years' labour. At that time I refused this most generous offer, intending to confine myself to anatomical observations; but I have since accepted it, and still have the entire splendid collection for my free use. Mr. Stutchbury, with unwearied kindness, further supplied me with fresh specimens for dissection, and with much valuable information. At about the same period, Mr. Cuming strongly urged me to take up the subject, and his advice had more weight with me than that of almost any other person. He placed his whole magnificent collection at my disposal, and urged me to treat it as if it were my own: whenever I told him that I thought it necessary, he permitted me to open unique specimens of great value, and dissect the included animal. I shall always feel deeply honoured by the confidence reposed in me by Mr. Cuming and Mr. Stutchbury.

I lie under obligations to so many naturalists, that I am, in truth, at a loss how to express my gratitude. Mr. Peach, over and over again, sent me fresh specimens of several species, and more especially of Scalpellum vulgare, which were of invaluable assistance to me in making out the singular sexual relations in that species. Mr. Peach, furthermore, made for me observations on several living individuals. Mr. W. Thompson, the distinguished Natural Historian of Ireland, has sent me the finest collection of British species, and their varieties, which I have seen, together with many very valuable MS. observations, and the results of experiments. Prof. Owen procured for me the loan of some very interesting specimens in the College of Surgeons, and has always given me his invaluable advice and opinion, when consulted by me....