A Mixed Proposal The Lady of the Barge and Others, Part 9. 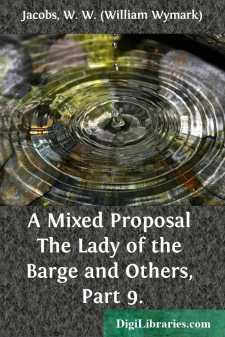 Major Brill, late of the Fenshire Volununteers, stood in front of the small piece of glass in the hatstand, and with a firm and experienced hand gave his new silk hat a slight tilt over the right eye. Then he took his cane and a new pair of gloves, and with a military but squeaky tread, passed out into the road. It was a glorious day in early autumn, and the soft English landscape was looking its best, but despite the fact that there was nothing more alarming in sight than a few cows on the hillside a mile away, the Major paused at his gate, and his face took on an appearance of the greatest courage and resolution before proceeding. The road was dusty and quiet, except for the children playing at cottage doors, and so hot that the Major, heedless of the fact that he could not replace the hat at exactly the same angle, stood in the shade of a tree while he removed it and mopped his heated brow.

He proceeded on his way more leisurely, overtaking, despite his lack of speed, another man who was walking still more slowly in the shade of the hedge.

"Beautiful," said the other, making no attempt to keep pace with him.

"Country wants rain, though," cried the Major over his shoulder.

Halibut assented, and walking slowly on, wondered vaguely what gaudy color it was that had attracted his eye. It dawned on him at length that it must be the Major's tie, and he suddenly quickened his pace, by no means reassured as the man of war also quickened his.

The Major stopped and waited for his friend; Halibut eyed the tie uneasily—it was fearfully and wonderfully made—but said nothing.

"Oh—I was going to ask you, Brill—Confound it! I've forgotten what I was going to say now. I daresay I shall soon think of it. You're not in a hurry?"

The other assuring him that it was, the Major paused in his career, and gripping the brim with both hands, deliberately tilted it over the right eye again.

"You were saying—" said Halibut, regarding this manoeuvre with secret disapproval.

"Yes," murmured the Major, "I was saying. Well, I don't mind telling an old friend like you, Halibut, though it is a profound secret. Makes me rather particular about my dress just now. Women notice these things. I'm—sha'nt get much sympathy from a confirmed old bachelor like you—but I'm on my way to put a very momentous question."

"The devil you are!" said the other, blankly.

"Only that I am going on the same errand," said the confirmed bachelor, with desperate calmness.

The Major looked at him, and for the first time noticed an unusual neatness and dressiness in his friend's attire. His collar was higher than usual; his tie, of the whitest and finest silk, bore a pin he never remembered to have seen before; and for the first time since he had known him, the Major, with a strange sinking at the heart, saw that he wore spats....