A Miscellany of Men 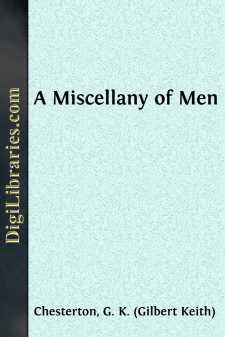 Rightly or wrongly, it is certain that a man both liberal and chivalric, can and very often does feel a dis-ease and distrust touching those political women we call Suffragettes. Like most other popular sentiments, it is generally wrongly stated even when it is rightly felt. One part of it can be put most shortly thus: that when a woman puts up her fists to a man she is putting herself in the only posture in which he is not afraid of her. He can be afraid of her speech and still more of her silence; but force reminds him of a rusted but very real weapon of which he has grown ashamed. But these crude summaries are never quite accurate in any matter of the instincts. For the things which are the simplest so long as they are undisputed invariably become the subtlest when once they are disputed: which was what Joubert meant, I suppose, when he said, "It is not hard to believe in God if one does not define Him." When the evil instincts of old Foulon made him say of the poor, "Let them eat grass," the good and Christian instincts of the poor made them hang him on a lamppost with his mouth stuffed full of that vegetation. But if a modern vegetarian aristocrat were to say to the poor, "But why don't you like grass?" their intelligences would be much more taxed to find such an appropriate repartee. And this matter of the functions of the sexes is primarily a matter of the instincts; sex and breathing are about the only two things that generally work best when they are least worried about. That, I suppose, is why the same sophisticated age that has poisoned the world with Feminism is also polluting it with Breathing Exercises. We plunge at once into a forest of false analogies and bad blundering history; while almost any man or woman left to themselves would know at least that sex is quite different from anything else in the world.

There is no kind of comparison possible between a quarrel of man and woman (however right the woman may be) and the other quarrels of slave and master, of rich and poor, or of patriot and invader, with which the Suffragists deluge us every day. The difference is as plain as noon; these other alien groups never came into contact until they came into collision. Races and ranks began with battle, even if they afterwards melted into amity. But the very first fact about the sexes is that they like each other. They seek each other: and awful as are the sins and sorrows that often come of their mating, it was not such things that made them meet. It is utterly astounding to note the way in which modern writers and talkers miss this plain, wide, and overwhelming fact: one would suppose woman a victim and nothing else. By this account ideal, emancipated woman has, age after age, been knocked silly with a stone axe. But really there is no fact to show that ideal, emancipated woman was ever knocked silly; except the fact that she is silly. And that might have arisen in so many other ways. Real responsible woman has never been silly; and any one wishing to knock her would be wise (like the streetboys) to knock and run away....