A Minstrel in France 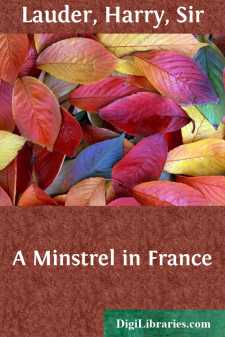 Yon days! Yon palmy, peaceful days! I go back to them, and they are as a dream. I go back to them again and again, and live them over. Yon days of another age, the age of peace, when no man dared even to dream of such times as have come upon us.

It was in November of 1913, and I was setting forth upon a great journey, that was to take me to the other side of the world before I came back again to my wee hoose amang the heather at Dunoon. My wife was going with me, and my brother-in-law, Tom Valiance, for they go everywhere with me. But my son John was coming with us only to Glasgow, and then, when we set out for Liverpool and the steamer that was to bring us to America he was to go back to Cambridge. He was near done there, the bonnie laddie. He had taken his degree as Bachelor of Arts, and was to set out soon upon a trip around the world.

Was that no a fine plan I had made for my son? That great voyage he was to have, to see the world and all its peoples! It was proud I was that I could give it to him. He was—but it may be I'll tell you more of John later in this book!

My pen runs awa' with me, and my tongue, too, when I think of my boyJohn.

We came to the pier at Dunoon, and there she lay, the little ferry steamer, the black smoke curling from her stack straight up to God. Ah, the braw day it was! There was a frosty sheen upon the heather, and the Clyde was calm as glass. The tops of the hills were coated with snow, and they stood out against the horizon like great big sugar loaves.

We were a' happy that day! There was a crowd to see us off. They had come to bid me farewell and godspeed, all my friends and my relations, and I went among them, shaking them by the hand and thinking of the long whiles before I'd be seeing them again. And then all my goodbys were said, and we went aboard, and my voyage had begun.

I looked back at the hills and the heather, and I thought of all I was to do and see before I saw those hills again. I was going half way round the world and back again. I was going to wonderful places to see wonderful things and curious faces. But oftenest the thought came to me, as I looked at my son, that him I would see again before I saw the heather and the hills and all the friends and the relations I was leaving behind me. For on his trip around the world he was to meet us in Australia! It was easier to leave him, easier to set out, knowing that, thinking of that!

Wonderful places I went to, surely. And wonderful things I saw and heard. But the most wonderful thing of all that I was to see or hear upon that voyage I did not dream of nor foresee. How was a mortal man to foresee? How was he to dream of it?

Could I guess that the very next time I set out from Dunoon pier the peaceful Clyde would be dotted with patrol boats, dashing hither and thither! Could I guess that everywhere there would be boys in khaki, and women weeping, and that my boy, John——! Ah, but I'll not tell you of that now.

Peaceful the Clyde had been, and peaceful was the Mersey when we sailed from Liverpool for New York....