A Mind That Found Itself An Autobiography 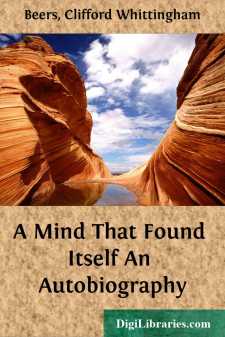 This story is derived from as human a document as ever existed; and, because of its uncommon nature, perhaps no one thing contributes so much to its value as its authenticity. It is an autobiography, and more: in part it is a biography; for, in telling the story of my life, I must relate the history of another self—a self which was dominant from my twenty-fourth to my twenty-sixth year. During that period I was unlike what I had been, or what I have been since. The biographical part of my autobiography might be called the history of a mental civil war, which I fought single-handed on a battlefield that lay within the compass of my skull. An Army of Unreason, composed of the cunning and treacherous thoughts of an unfair foe, attacked my bewildered consciousness with cruel persistency, and would have destroyed me, had not a triumphant Reason finally interposed a superior strategy that saved me from my unnatural self.

I am not telling the story of my life just to write a book. I tell it because it seems my plain duty to do so. A narrow escape from death and a seemingly miraculous return to health after an apparently fatal illness are enough to make a man ask himself: For what purpose was my life spared? That question I have asked myself, and this book is, in part, an answer.

I was born shortly after sunset about thirty years ago. My ancestors, natives of England, settled in this country not long after the Mayflower first sailed into Plymouth Harbor. And the blood of these ancestors, by time and the happy union of a Northern man and a Southern woman—my parents—has perforce been blended into blood truly American.

The first years of my life were, in most ways, not unlike those of other American boys, except as a tendency to worry made them so. Though the fact is now difficult for me to believe, I was painfully shy. When first I put on short trousers, I felt that the eyes of the world were on me; and to escape them I hid behind convenient pieces of furniture while in the house and, so I am told, even sidled close to fences when I walked along the street. With my shyness there was a degree of self-consciousness which put me at a disadvantage in any family or social gathering. I talked little and was ill at ease when others spoke to me.

Like many other sensitive and somewhat introspective children, I passed through a brief period of morbid righteousness. In a game of "one-old-cat," the side on which I played was defeated. On a piece of scantling which lay in the lot where the contest took place, I scratched the score. Afterwards it occurred to me that my inscription was perhaps misleading and would make my side appear to be the winner. I went back and corrected the ambiguity. On finding in an old tool chest at home a coin or medal, on which there appeared the text, "Put away the works of darkness and put on the armour of light," my sense of religious propriety was offended. It seemed a sacrilege to use in this way such a high sentiment, so I destroyed the coin....