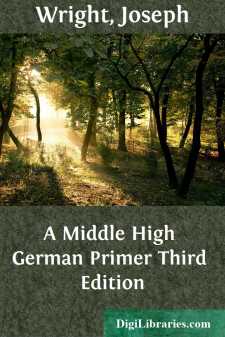 Middle High German (MHG.) embraces the High German language from about the year 1100 to 1500. It is divided into three great dialect-groups: Upper German, Franconian, and East Middle German.

1. Upper German is divided into: (a) Alemanic, embracing High Alemanic (Switzerland), and Low Alemanic (South Baden, Swabia, and Alsace). (b) Bavarian, extending over Bavaria and those parts of Austria where German is spoken.

Since it is impossible to deal with all these dialects in an elementary book like the present, we shall confine ourselves almost exclusively to Upper German, and shall only deal with that period of Middle High German which extends from about 1200 to 1300.

PHONOLOGY CHAPTER I THE VOWELS

§ 2. MHG. had the following simple vowels and diphthongs:—

Note.— ë represents primitive Germanic e (= Gr. ε, Lat. e, as in Gr. δá½³κα, Lat. decem, MHG. zëhen, ten) and is generally written ë in Old and Middle High German grammars, in order to distinguish it from the OHG. umlaut-e (). The former was an open sound like the e in English bed, whereas the latter was a close sound like the é in French été. ä was a very open sound nearly like the a in English hat, and arose in MHG. from the i-umlaut of a (). Good MHG. poets do not rhyme Germanic ë with the umlaut-e, and the distinction between the two sounds is still preserved in many NHG. dialects. In like manner the modern Bavarian and Austrian dialects still distinguish between ä and ë. In the MHG. period ä, ë, and e were kept apart in Bavarian, but in Alemanic and Middle German ä and ë seem to have fallen together in ë or possibly ä, as the two sounds frequently rhyme with each other in good poets. MHG. texts do not always preserve in writing the distinction between the old umlaut-e and the MHG. umlaut-ä, both being often written e in the same text.

Pronunciation of the Vowels.

§ 3. The approximate pronunciation of the above vowels and diphthongs was as follows:—