A Manual or an Easy Method of Managing Bees 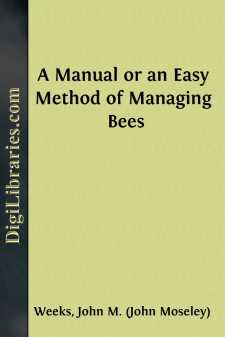 RULE I. ON THE CONSTRUCTION OF A BEE-HIVE.

A bee-hive should be made of sound boards, free from shakes and cracks; it should also be planed smooth, inside and out, made in a workmanlike manner, and painted on its outside.

That a bee-hive should be made perfect, so as to exclude light and air, is obvious from the fact, that the bees will finish what the workman has neglected, by plastering up all such cracks and crevices, or bad joints, as are left open by the joiner. The substance they use for this purpose is neither honey nor wax, but a kind of glue or cement of their own manufacturing, and is used by the bees to fill up all imperfect joints and exclude all light and air. This cement or glue is very congenial to the growth of the moth in the first stages of its existence.

The moth miller enters the hive, generally, in the night—makes an incision into the glue or cement with her sting, and leaves her eggs deposited in the glue, where it remains secure from the bees; it being guarded by the timber on its sides. Thus, while a maggot, (larva) the moth uses the cement for food until it arrives so far towards a state of maturity as to be able to spin a web, which is more fully explained in remarks on Rule 10.

The size of a hive should be in accordance with the strictest rules of economy, and adapted to the peculiar nature and economy of the honey-bee, in order to make them profitable to their owner.

The lower apartment of the hive, where they store their food, raise their young bees, and perform their ordinary labors, should hold as much as a box thirteen inches and one half or fourteen inches square in the clear.

If the hive is much larger than the one described above, with the chamber in proportion, which should hold about two-thirds as much as the lower apartment, the bees will not be likely to swarm during the season.

Bees in large hives never swarm; and those in hives much less than the one already described, do but little else than raise young bees and lay up a sufficient quantity of food to supply them through the coming winter, and are more liable to be robbed.

All hives of bees that swarm are liable to swarm too much, and reduce their colonies so low in numbers as to materially injure them, and is frequently the cause of their destruction by the moth, which is more particularly explained in remarks on Rule 2.

The changer of the hive should be made perfectly tight, so as to exclude all light from the drawers.

Drawers should be small like No. 2, for all purposes except such as are used for multiplying colonies and transferring, which should always be large like No. 1.

Hives should have elects on their sides, so as to suspend them in the air some distance from the floor of the apiary, the better to secure the bees from destruction by mice, reptiles, and other vermin.

The back side or rear of the lower apartment of the hive should slant forward, so as to render the same smallest at the bottom, the better to secure the combs from falling when cracked by frost or nearly melted in hot weather....