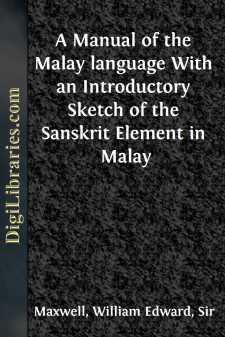 The language which I have endeavoured to illustrate in the following pages is the Malay of the British Settlements in the Straits of Malacca, some knowledge of which I have had the opportunity of acquiring during sixteen years’ service in Penang, Province Wellesley, Malacca, Singapore, and Perak.

Dialectical peculiarities are so abundant in Malay that it is impossible to teach the colloquial language of the people without imparting to the lesson the distinct marks of a particular locality. In parts of India it is said proverbially that in every twelve kos there is a variation in the language, and very much the same might be said of the Malay Peninsula and adjacent islands. The construction of the language and the general body of words remain, of course, the same, but in every state or subdivision of a state there are peculiar words and expressions and variations of accent and pronunciation which belong distinctively to it. Words common in one district sound strangely in another, or, it may be, they convey different meanings in the two places. Even words of such constant occurrence as the personal pronouns “I” and “you” vary according to locality. The Kedah accent is easily distinguished from that of Patani, and that again from the speech of Trengganu and Pahang. Certain expressions common in Penang are almost unintelligible in Malacca and Singapore, and vice versâ. In Perak it is not difficult to say whether a man comes from the upper or lower reaches of the river, by merely noting particular words in his conversation. Even individual villages and districts have their peculiar twang or their tricks of expression not found elsewhere. In Java, Sumatra, and other islands eastward in which Malay is spoken, the pronunciation and character of the language are much influenced by the other languages current there. Malay is only spoken in perfection in places where the natives speak no other tongue.

Native pedantry has endeavoured to classify various styles of speaking, as the court style (bahasa dalam), the well-bred style (bahasa bangsawan), the trader’s language (bahasa dagang), and the mixed language (bahasa kachau-kan), but all that can be correctly said is, that a limited number of words are used exclusively in intercourse with royal personages; that persons of good birth and education, in the Eastern Archipelago, as elsewhere, select their expressions more carefully than the lower classes; and that the vocabulary of commerce does not trouble itself with the graces of style and the copious use of Arabic words which commend themselves to native writers.

The written language is more stilted and less terse and idiomatic than the colloquial dialect; and even where pure Malay is employed, the influence of Arabic compositions is very marked. Whole sentences, sometimes, though clothed in excellent Malay, are unacknowledged translations of Arabic phrases. This may be verified by any one well acquainted with Malay literary compositions who will look into a really good translation of an Arabic work; for instance, Lane’s translation of the “Thousand and One Nights.” The Malay speaks much better than he writes, and has at his command quantities of words which never find their way into his literature, and, therefore, but rarely into dictionaries compiled by Europeans....