A Man's Value to Society Studies in Self Culture and Character 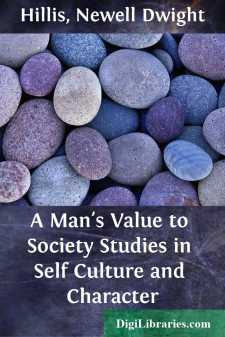 "There is nothing that makes men rich and strong but that which they carry inside of them. Wealth is of the heart, not of the hand."—John Milton.

"Until we know why the rose is sweet or the dew drop pure, or the rainbow beautiful, we cannot know why the poet is the best benefactor of society. The soldier fights for his native land, but the poet touches that land with the charm that makes it worth fighting for and fires the warrior's heart with energy invincible. The statesman enlarges and orders liberty in the state, but the poet fosters the core of liberty in the heart of the citizen. The inventor multiplies the facilities of life, but the poet makes life better worth living."—George Wm. Curtis.

"Not all men are of equal value. Not many Platos: only one, to whom a thousand lesser minds look up and learn to think. Not many Dantes: one, and a thousand poets tune their harps to his and repeat his notes. Not many Raphaels: one, and no second. But a thousand lesser artists looking up to him are lifted to his level. Not many royal hearts—great magazines of kindness. Happy the town blessed with a few great minds and a few great hearts. One such citizen will civilize an entire community."—H.

I The Elements of Worth in the Individual

Our scientific experts are investigating the wastes of society. Their reports indicate that man is a great spendthrift. He seems not so much a husbandman, making the most of the treasures of his life-garden, as a robber looting a storehouse for booty.

Travelers affirm that one part of the northern pineries has been wasted by man's careless fires and much of the rest by his reckless axe. Coal experts insist that a large percentage of heat passes out of the chimney. The new chemistry claims that not a little of the precious ore is cast upon the slag heap.

In the fields the farmers overlook some ears of corn and pass by some handfuls of wheat. In the work-room the scissors leave selvage and remnant. In the mill the saw and plane refuse slabs and edges. In the kitchen a part of what the husband carries in, the wife's wasteful cooking casts out. But the secondary wastes involve still heavier losses. Man's carelessness in the factory breaks delicate machinery, his ignorance spoils raw materials, his idleness burns out boilers, his recklessness blows up engines; and no skill of manager in juggling figures in January can retrieve the wastes of June.

Passing through the country the traveler finds the plow rusting in the furrow, mowers and reapers exposed to rain and snow; passing through the city he sees the docks lined with boats, the alleys full of broken vehicles, while the streets exhibit some broken-down men. A journey through life is like a journey along the trackway of a retreating army; here a valuable ammunition wagon is abandoned because a careless smith left a flaw in the tire; there a brass cannon is deserted because a tug was improperly stitched; yonder a brave soldier lies dying in the thicket where he fell because excited men forgot the use of an ambulance. What with the wastes of intemperance and ignorance, of idleness and class wars, the losses of society are enormous....