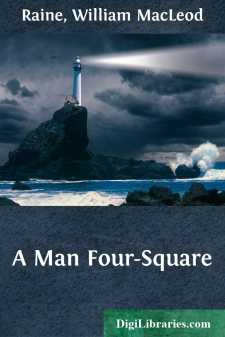 The boy had spent the night at a water-hole in a little draw near the foot of the mesa. He had supped on cold rations and slept in his blanket without the comfort of glowing piñon knots. For yesterday he had cut Indian signs and after dark had seen the shadow of Apache camp-fires reflected in the clouds.

After eating he swung to the bare back of his pony and climbed to the summit of the butte. His trained eyes searched the plains. A big bunch of antelope was trailing down to water almost within rifle-shot. But he was not looking for game.

He sniffed the smoke from the pits where the renegades were roasting mescal and judged the distance to the Apache camp at close to ten miles. His gaze swept toward the sunrise horizon and rested upon a cloud of dust. That probably meant a big herd of cattle crossing to the Pecos Valley on the Chisum Trail that led to Fort Stanton. The riders were likely just throwing the beeves from the bed-ground to the trail. The boy waited to make sure of their line of travel.

Presently he spoke aloud, after the fashion of the plainsman who spends much time alone in the saddle. "Looks like they'll throw off to-night close to the 'Pache camp. If they do hell's a-goin' to pop just before sunup to-morrow. I reckon I'll ride over and warn the outfit."

From a trapper the boy had learned that a band of Mescalero Apaches had left the reservation three weeks before, crossed into Mexico, gone plundering down the Pecos, and was now heading back toward the Staked Plains. Evidently the drover did not know this, since he was moving his cattle directly toward the Indian camp.

The young fellow let his cowpony pick its way down the steep shale hill to the draw. He saddled without a waste motion, packed his supplies deftly, mounted, and was off. In the way he cut across the desert toward the moving herd was the certainty of the frontiersman. He did not hurry, but he wasted no time. His horse circled in and out among the sand dunes, now topped a hill, now followed a wash. Every foot of the devious trail was the most economical possible.

At the end of nearly an hour's travel he pulled up, threw down his bridle reins, and studied the ground carefully. He had cut Indian sign. What he saw would have escaped the notice of a tenderfoot, and if it had been pointed out to him none but an expert trailer would have understood its significance. Yet certain facts were printed here on the desert for this boy as plainly as if they had been stenciled on a guide-post. He knew that within forty-eight hours a band of about twenty Mescalero bucks had returned to camp this way from an antelope hunt and that they carried with them half a dozen pronghorns. It was a safe guess that they were part of the large camp the smoke of which he had seen.

Long before the young man struck the drive, he knew he was close by the cloud of dust and the bawling of the cattle. His course across country had been so accurate that he hit the herd at the point without deflecting....