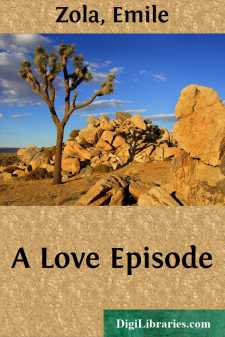 The night-lamp with a bluish shade was burning on the chimney-piece, behind a book, whose shadows plunged more than half the chamber in darkness. There was a quiet gleam of light cutting across the round table and the couch, streaming over the heavy folds of the velvet curtains, and imparting an azure hue to the mirror of the rosewood wardrobe placed between the two windows. The quiet simplicity of the room, the blue tints on the hangings, furniture, and carpet, served at this hour of night to invest everything with the delightful vagueness of cloudland. Facing the windows, and within sweep of the shadow, loomed the velvet-curtained bed, a black mass, relieved only by the white of the sheets. With hands crossed on her bosom, and breathing lightly, lay Helene, asleep—mother and widow alike personified by the quiet unrestraint of her attitude.

In the midst of the silence one o'clock chimed from the timepiece. The noises of the neighborhood had died away; the dull, distant roar of the city was the only sign of life that disturbed those Trocadero heights. Helene's breathing, so light and gentle, did not ruffle the chaste repose of her bosom. She was in a beauteous sleep, peaceful yet sound, her profile perfect, her nut-brown hair twisted into a knot, and her head leaning forward somewhat, as though she had fallen asleep while eagerly listening. At the farther end of the room the open door of an adjoining closet seemed but a black square in the wall.

Still there was not a sound. The half-hour struck. The pendulum gave but a feeble tick-tack amid the general drowsiness that brooded over the whole chamber. Everything was sleeping, night-lamp and furniture alike; on the table, near an extinguished lamp, some woman's handiwork was disposed also in slumber. Helene in her sleep retained her air of gravity and kindliness.

Two o'clock struck, and the stillness was broken. A deep sigh issued from the darkness of the closet. There was a rustling of linen sheets, and then silence reigned again. Anon labored breathing broke through the gloom. Helene had not moved. Suddenly, however, she started up, for the moanings and cries of a child in pain had roused her. Dazed with sleep, she pressed her hands against her temples, but hearing a stifled sob, she leaped from her couch on to the carpet.

"Jeanne! my Jeanne! what ails you? tell me, love," she asked; and as the child remained silent, she murmured, while running towards the night-light, "Gracious Heaven! why did I go to bed when she was so ill?"

Quickly she entered the closet, where deep silence had again fallen. The feeble gleam of the lamp threw but a circular patch of light on the ceiling. Bending over the iron cot, she could at first make out nothing, but amidst the bed-clothes, tossed about in disorder, the dim light soon revealed Jeanne, with limbs quite stiff, her head flung back, the muscles of her neck swollen and rigid. Her sweet face was distorted, her eyes were open and fixed on the curtain-rod above....