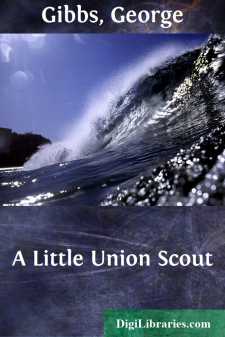 A young lady, just returned from college, was making a still-hunt in the house for old things—old furniture, old china, and old books. She had a craze for the antique, and the older things were the more precious they were in her eyes. Among other things she found an old scrap-book that her mother and I thought was safe under lock and key. She sat in a sunny place and read it page by page, and, when she had finished, her curiosity was aroused. The clippings in the old scrap-book were all about the adventures of a Union scout whose name was said to be Captain Frank Leroy. The newspaper clippings that had been preserved were queerly inconsistent. The Northern and Western papers praised the scout very highly, and some of them said that if there were more such men in the army the cause of the Union would progress more rapidly; whereas the Southern papers, though paying a high tribute to the dash and courage of the scout, were highly abusive. He was "one of Lincoln's hirelings" and as villanous as he was bold.

The girl graduate at once jumped to the conclusion that there was a story behind the old scrap-book, else why should it be preserved by her father, who had been a Confederate soldier? This idea no sooner took shape than she became insistently inquisitive. As for her father, the very sight of the scrap-book awoke the echoes of a hundred experiences—long and dangerous rides in the lonely night, battles, sharp skirmishes and bitter sufferings.

The story, such as it was, took shape in my mind, and I am afraid that the young girl had small difficulty in persuading me to tell it. Memory brought before me the smiling features of Harry Herndon, my life-long friend and comrade, the handsome face of Jack Bledsoe, one of our college mates from Missouri, and the beautiful countenance of his sister, Katherine Bledsoe. These and a hundred other faces came crowding from the past, and the story was told almost before I knew it.

When Harry Herndon and I went to the wars we were somewhat belated. The excitement of '61 found us at college, where we had orders to remain until we had finished the course, and the orders came from one whom we had never dared to disobey—Harry's grandmother. And then, when we were ready to go, she cut in ahead of our plans and sent us to the West with letters to General Dabney Maury, whom she had known when he was a boy and later when he was a young officer in the regular army.

We were not ill-equipped for two raw youngsters; we had Whistling Jim, the negro, three fine horses, and more money than I had ever seen before. We went to General Maury and were most courteously received. The Virginia Herndons—Harry belonged to the Maryland branch—were related to him—and he liked the name. We caught the barest glimpse of service at Corinth, and were fortunate enough to be in a few skirmishes, where we distinguished ourselves by firing at nothing whatever.

In the course of a few weeks General Maury was made commander of the Department of the Gulf, with headquarters at Mobile, where we saw service as clerks and accountants. For my part, the life suited me passing well, but Harry Herndon fretted so that we were soon transferred to the command of General Forrest, who was sadly in need of men. As it happened, we had little difficulty in finding our man. We had heard that he was in the neighborhood of Chattanooga, giving his men and horses a much-needed rest; but on the way news came to us that, in spite of his brilliant achievements in the field, he had been deprived of the choicest regiments of his brigade—men whom he had trained and seasoned to war. After this mutilation of his command, he had been ordered to Murfreesborough to recruit and organize a new brigade.

Toward Murfreesborough, therefore, we made our way, falling in with a number of Forrest's men who had been on a brief visit to their homes in Alabama and were now returning to their command. As we shortly discovered, the Union commanders in Tennessee mistook General Forrest's movement to the neighborhood of Chattanooga for a retreat; for, shortly after he moved in that direction, an ambitious Federal officer asked and received permission to enter Northern Alabama with a force large enough to worry the Confederate leader if he could be found....