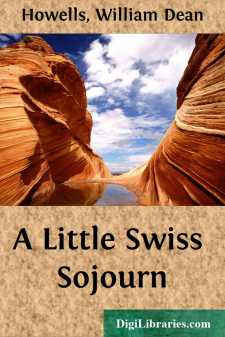 Out of eighty or ninety days that we passed in Switzerland there must have been at least ten that were fair, not counting the forenoons before it began to rain, and the afternoons when it cleared up. They said that it was an unusually rainy autumn, and we could well believe it; yet I suspect that it rains a good deal in that little corner of the Canton Vaud even when the autumn is only usually rainy. We arrived late in September and came away early in December, and during that time we had neither the fevers that raged in France nor the floods that raged in Italy. We Vaudois were rather proud of that, but whether we had much else to be proud of I am not so certain. Of course we had our Alpine scenery, and when the day was fair the sun came loafing up over the eastern mountains about ten o'clock in the morning, and lounged down behind the western tops about half-past three, after dinner. But then he left the eternal snows of the Dent-du-Midi all flushed with his light, and in the mean time he had glittered for five hours on the "bleu impossible" of the Lake of Geneva, and had shown in a hundred changing lights and shadows the storied and sentimentalized towers of the Castle of Chillon. Solemn groups and ranks of Swiss and Savoyard Alps hemmed the lake in as far as the eye could reach, and the lateen-sailed craft lent it their picturesqueness, while the steamboats constantly making its circuit and stopping at all the little towns on the shores imparted a pleasant modern interest to the whole effect, which the trains of the railroad running under the lee of the castle agreeably heightened.

The Swiss railroad was always an object of friendly amusement with the children, who could not get used to having the trains started by a small Christmas-horn. They had not entirely respected the English engine, with the shrill falsetto of its whistle, after the burly roar of our locomotives; and the boatswain's pipe of the French conductor had considerably diminished the dignity of a sister republic in their minds; but this Christmas-horn was too droll. That a grown man, much more imposingly uniformed than an American general, should blow it to start a real train of cars was the source of patriotic sarcasm whenever its plaintive, reedy note was heard. We had come straight through from London, taking the sleeping-car at Calais, and rolling and bounding over the road towards Basle in a fashion that provoked scornful comparisons with the Pullman that had carried us so smoothly from Boston to Buffalo. It is well to be honest, even to our own adulation, and one must confess that the sleeping-car of the European continent is but the nervous and hysterical daughter of the American mother of sleeping-cars. Many express trains are run without any sleeper, and the charges for berths are ludicrously extravagant—five dollars apiece for a single night. It is not strange that the native prefers to doze away the night bolt-upright, or crouched into the corners of his repellently padded carriage, rather than toss upon the expensive pallet of the sleeping-car, which seems hung rather with a view to affording involuntary exercise than promoting dear-bought slumber....