A Little Maid of Province Town 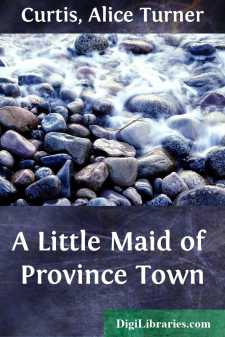 “I don’t know what I can do with you, I’m sure!” declared Mistress Stoddard, looking down at the small girl who stood on her door-step gazing wistfully up at her.

“A man at the wharf said that you didn’t have any little girls,” responded the child, “and so I thought——”

“’Twas Joe Starkweather told you, I’ll be bound,” said Mrs. Stoddard. “Well, he’s seven of his own to fend for.”

“Seven little girls?” said Anne Nelson, in an almost terror-stricken voice, her dark eyes looking earnestly into the stern face that frowned down upon her. “And what would become of them if their mother should die, and their father be lost at sea?”

“Sure enough. You have sense, child. But the Starkweathers are all boys. Well, come in. You can take your bundle to the loft and leave it, and we’ll see what I can find for you to do. How old are you?”

“Well, a child of eight isn’t much use in a house, but maybe you can save me steps.”

“Yes, indeed, Mistress Stoddard; I did a deal to help my father about the house. He said I could do as much as a woman. I can sweep out for you, and lay the table and wash the dishes, and bring in the wood and water, and——” there came a break in the little girl’s voice, and the woman reached out a kindly hand and took the child’s bundle.

“Come in,” she said, and Anne instantly felt the tenderness of her voice. “We are poor enough, but you’ll be welcome to food and shelter, child, till such time as some of your own kinsfolk send for thee.”

“I have no kinsfolk,” declared Anne; “my father told me that.”

“Come you in; you’ll have a bed and a crust while I have them to give you,” declared the woman, and Anne Nelson went across the threshold and up to the bare loft, where she put her bundle down on a wooden stool and looked about the room.

There was but a narrow bed in the corner, covered with a patchwork quilt, and the wooden stool where Anne had put her bundle. The one narrow window looked off across the sandy cart tracks which served as a road toward the blue waters of Cape Cod Bay. It was early June, and the strong breath of the sea filled the rough little house, bringing with it the fragrance of the wild cherry blossoms and an odor of pine from the scrubby growths on the low line of hills back of the little settlement.

It was just a year ago, Anne remembered, as she unwrapped her bundle, that she and her father had sailed across the harbor from Ipswich, where her mother had died.

“We will live here, at the very end of the world, where a man may think as he pleases,” her father had said, and had moved their few household possessions into a three-roomed house near the shore. Then he had given his time to fishing, leaving Anne alone in the little house to do as she pleased.

She was a quiet child, and found entertainment in building sand houses on the beach, in wandering along the shore searching for bright shells and smooth pebbles, and in doing such simple household tasks as her youth admitted....