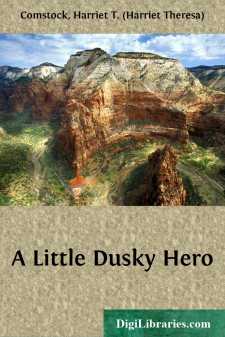 The dead heat of Tampa hung heavy within the tent; the buzz of the flies was most distressing; but the reports must be got off, and after them there were letters to be written to "the Boy and his Mother" up North, telling them—especially the Boy—what a glorious thing it is to serve one's country under any circumstances. The present circumstances were extremely trying, to be sure, but the firm brown hand glided back and forth over the long pages in a determined manner that showed how Colonel Austin believed in doing his duty.

It was a soft little voice, and it droned away into the buzz of the flies and the scratching of the pen so that the writer at the rough table took no heed.

This time Colonel Austin turned. He was a firm believer in discipline, and the unannounced arrival annoyed him. He swung around and gazed sternly about six feet from the ground. There was nothing there! His eyes dropped and finally rested upon the very smallest, dirtiest, raggedest black boy he had ever seen. But the beautiful great eyes of the forlorn mite looked trustingly up at the surprised officer, and Colonel Austin noticed that the grimy cheeks were tear-stained though the childish lips were smiling bravely.

"Why, good morning to you!" the Colonel replied. He was always tender with sick soldiers, women, and children, and the pathetic little figure before him touched his sympathy. "Who are you, my small friend?"

"Just so; and where are your folks?"

"No folks any more, sah. Daddy he done got put in prison fur life, sah, 'cos he killed a frien' of his, an' my mammy she done died yesterday. I jus' come from her buryin', sah." Two slow tears fell from the soft brown eyes and rolled over the stained cheeks.

Colonel Austin's throat grew dry, as it always did when he looked upon suffering things bearing pain and trouble bravely.

"And why do you come here, my child?" he asked kindly.

The boy certainly was not over nine, and was undersized and childish-looking even for that.

"Work!" smiled the grave Colonel, "what in the world can you do?"

The ring of pride in the piping voice reached the Colonel's heart. "Oh! I see," he nodded. "You wish to be a soldier boy, is that it?"

The grimy little applicant drew himself up to his extreme height, and replied with magnificent scorn. "No, sah! I does not wish to be a sojer boy. I wish ter be one ob dem heroes, sah!"

A joke was a rare thing in those dull, waiting days, and George Washington McKinley Jones was delicious. The Colonel smoothed the smiles from his mouth as best he could....