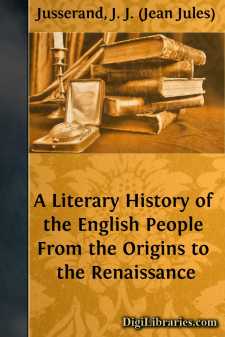 The people that now occupies England was formed, like the French people, by the fusion of several superimposed races. In both countries the same races met and mingled at about the same period, but in different proportions and under dissimilar social conditions. Hence the striking resemblances and sharply defined contrasts that exist in the genius of the two nations. Hence also the contradictory sentiments which mutually animated them from century to century, those combinations and recurrences of esteem that rose to admiration, and jealousy that swelled to hate. Hence, again, the unparalleled degree of interest they offer, one for the other. The two people are so dissimilar that in borrowing from each other they run no risk of losing their national characteristics and becoming another's image; and yet, so much alike are they, it is impossible that what they borrowed should remain barren and unproductive. These loans act like leaven: the products of English thought during the Augustan age of British literature were mixed with French leaven, and the products of French thought during the Victor Hugo period were penetrated with English yeast.

Ancient writers have left us little information concerning the remotest period and the oldest inhabitants of the British archipelago; works which would be invaluable to us exist only in meagre fragments. Important gaps have fortunately been filled, owing to modern Science and to her manifold researches. She has inherited the wand of the departed wizards, and has touched with her talisman the gate of sepulchres; the tombs have opened and the dead have spoken. What countries did thy war-ship visit? she inquired of the Scandinavian viking. And in answer the dead man, asleep for centuries among the rocks of the Isle of Skye, showed golden coins of the caliphs in his skeleton hand. These coins are not a figure of speech; they are real, and may be seen at the Edinburgh Museum. The wand has touched old undeciphered manuscripts, and broken the charm that kept them dumb. From them rose songs, music, love-ditties, and war-cries: phrases so full of life that the living hearts of to-day have been stirred by them; words with so much colour in them that the landscape familiar to the eyes of the Celts and Germans has reappeared before us.

Much remains undiscovered, and the dead hold secrets they may yet reveal. In the unexplored tombs of the Nile valley will be found one day, among the papyri stripped from Ptolemaic mummies, the account of a journey made to the British Isles about 330 b.c., by a Greek of Marseilles named Pytheas, a contemporary of Aristotle and Alexander the Great, of which a few sentences only have been preserved. But even now the darkness which enveloped the origin has been partly cleared away.

To the primitive population, the least known of all, that reared the stones of Carnac in France, and in England the gigantic circles of Stonehenge and Avebury, succeeded in both countries, many centuries before Christ, the Celtic race....