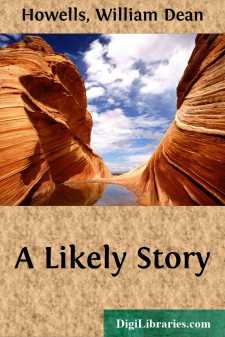 Mrs. Campbell: "Now this, I think, is the most exciting part of the whole affair, and the pleasantest." She is seated at breakfast in her cottage at Summering-by-the-Sea. A heap of letters of various stylish shapes, colors, and superscriptions lies beside her plate, and irregularly straggles about among the coffee-service. Vis-à-vis with her sits Mr. Campbell behind a newspaper. "How prompt they are! Why, I didn't expect to get half so many answers yet. But that shows that where people have nothing to do but attend to their social duties they are always prompt—even the men; women, of course, reply early anyway, and you don't really care for them; but in town the men seem to put it off till the very last moment, and then some of them call when it's over to excuse themselves for not having come after accepting. It really makes you wish for a leisure class. It's only the drive and hurry of American life that make our men seem wanting in the convenances; and if they had the time, with their instinctive delicacy, they would be perfect: it would come from the heart: they're more truly polite now. Willis, just look at this!"

Campbell, behind his paper: "Look at what?"

Mrs. Campbell: "These replies. Why, I do believe that more than half the people have answered already, and the invitations only went out yesterday. That comes from putting on R.S.V.P. I knew I was right, and I shall always do it, I don't care what you say."

Campbell: "You didn't put on R.S.V.P. after all I said?" He looks round the edge of his paper at her.

Mrs. Campbell: "Yes, I did. The idea of your setting up for an authority in such a thing as that!"

Campbell: "Then I'm sorry I didn't ask you to do it. It's a shame to make people say whether they'll come to a garden-party from four till seven or not."

Mrs. Campbell: "A shame? How can you provide if you don't know how many are coming? I should like to know that. But of course I couldn't expect you to give in gracefully."

Campbell: "I should give in gracefully if I gave in at all, but I don't." He throws his paper down beside his chair. "Here, hand over the letters, and I'll be opening them for you while you pour out the coffee."

Mrs. Campbell, covering the letters with her hands: "Indeed you won't!"

Campbell: "Well, pour out the coffee, then, anyway."

Mrs. Campbell, after a moment's reflection: "No, I shall not do it. I'm going to open them every one before you get a drop of coffee—just to punish you."

Campbell: "To punish me? For what?" Mrs. Campbell hesitates, as if at a loss what to say. "There! you don't know."

Campbell: "How can I till I've had some coffee? My mind won't work on an empty stomach. Well—" He rises and goes round the table towards her.

Mrs. Campbell, spreading both arms over the letters: "Willis, if you dare to touch them, I'll ring for Jane, and then she'll see you cutting up."

Campbell: "Touch what? I'm coming to get some coffee."

Mrs. Campbell: "Well, I'll give you some coffee; but don't you touch a single one of those letters—after what you've said."

Campbell: "All right!" He extends one hand for the coffee, and with the other sweeps all the letters together, and starts back to his place. As she flies upon him, "Look out, Amy; you'll make me spill this coffee all over the table-cloth."

Mrs. Campbell, sinking into her seat: "Oh, Willis, how can you be so base? Give me my letters. Do!"

Campbell, sorting them over: "You may have half."

Campbell: "Well, then, you may have all the ladies' letters. There are twice as many of them."

Campbell: "How can I tell which are the men's without opening them?"

Mrs. Campbell: "How could you tell which were the ladies'? Come, now, Willis, don't tease me any longer. You know I hate it."

Campbell, studying the superscriptions, one after another: "I want to see if I can guess who wrote them. Don't you like to guess who wrote your letters before you open them?"

Mrs. Campbell, with dignity: "I don't like to guess who wrote other people's letters." She looks down at the table-cloth with a menace of tears, and Campbell instantly returns all the notes....