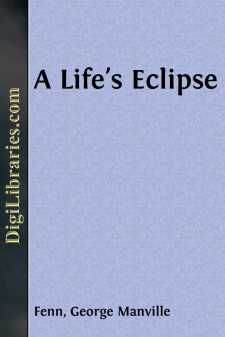 John Grange’s brown, good-looking face turned of a reddish-brown in the cheeks, the warm tint mounting into his forehead, as he looked straight in the speaker’s eyes, and there was a good, manly English ring in his voice as he said sturdily—

“I didn’t know, Mr Ellis, that it was insolent for a man to come in a straightforward way, and say to the father of the young lady simply—yes, and humbly—‘I love your daughter, sir.’”

“But it is, sir, downright insolence. Recollect what you are, sir, only an under-gardener living at the bothy on thirty shillings a week.”

“I do recollect it, sir, but I don’t mean to be an under-gardener always.”

“Oh, indeed,” said James Ellis sarcastically, “but poor old Dunton is not dead yet, and when he does die, Mrs Mostyn is quite as likely to appoint Daniel Barnett to his place as you, and if she takes my advice, she’ll give the post to neither of you, but get some able, sensible man from Chiswick.”

“That will do, John Grange,” said the owner of that name pompously. “I know what you are going to say. I am not ashamed of having been only a gardener once, but I am Mrs Mostyn’s bailiff and agent now, sir, and, so to speak, your master. Let me hear no more of this nonsense, sir. That will do. But one moment. Have you had the—I mean, does Mary—I mean, does Miss Ellis know that you were going to speak to me this evening?”

“No, sir,” said John Grange sternly. “I’m only an under-gardener, but I’ve heard that it was the proper thing to speak out openly first.”

“Then Mary does not know that you—I mean, that you think about her?”

“I hope and believe she does; sir,” said the young man warmly, and his eyes flashed, and a proud, joyful look came into his countenance.

“Then I beg you will not hope and believe anything of the kind, sir, again. My daughter will do precisely as I wish, and when I part with her, it will be to see her go to a substantial home. Good-evening!”

James Ellis tucked his walking-stick under his arm, took off his grey felt hat, drew a red silk handkerchief from the crown, rubbed his bald head, and made himself look hotter as he strode away, while after standing and watching him go toward the bailiff’s cottage just outside the park fence at The Hollows on the hill slope, a quarter of a mile away, the young man uttered a sigh and turned in at an open doorway in a high wall, whose top was fringed with young shoots of peaches, nectarines, and apricots, suggestive of the horticultural treasures within.

“What a slap in the face!” he muttered. “Under-gardener! Well, that’s all right. Give poor old Dunton’s place to Dan Barnett! Here, I can’t go in now, I must walk this off.”

John Grange pulled the open door to, so that it fastened with a snap, and turned off to make for the woods, where he could think alone.

His way was for a couple of hundred yards toward the pretty villa known as the bailiff’s cottage, and he had not gone half that distance when a sudden pang shot through him....