A Life of William Shakespeare with portraits and facsimiles 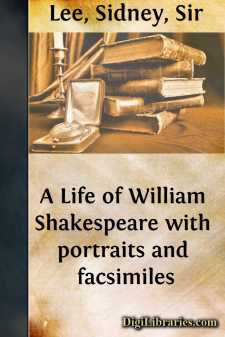 This work is based on the article on Shakespeare which I contributed last year to the fifty-first volume of the ‘Dictionary of National Biography.’  But the changes and additions which the article has undergone during my revision of it for separate publication are so numerous as to give the book a title to be regarded as an independent venture.  In its general aims, however, the present life of Shakespeare endeavours loyally to adhere to the principles that are inherent in the scheme of the ‘Dictionary of National Biography.’  I have endeavoured to set before my readers a plain and practical narrative of the great dramatist’s personal history as concisely as the needs of clearness and completeness would permit.  I have sought to provide students of Shakespeare with a full record of the duly attested facts and dates of their master’s career.  I have avoided merely æsthetic criticism.  My estimates of the value of Shakespeare’s plays and poems are intended solely to fulfil the obligation that lies on the biographer of indicating succinctly the character of the successive labours which were woven into the texture of his hero’s life.  Æsthetic studies of Shakespeare abound, and to increase their number is a work of supererogation.  But Shakespearean literature, as far as it is known to me, still lacks a book that shall supply within a brief compass an exhaustive and well-arranged statement of the facts of Shakespeare’s career, achievement, and reputation, that shall reduce conjecture to the smallest dimensions consistent with coherence, and shall give verifiable references to all the original sources of information.  After studying Elizabethan literature, history, and bibliography for more than eighteen years, I believed that I might, without exposing myself to a charge of presumption, attempt something in the way of filling this gap, and that I might be able to supply, at least tentatively, a guide-book to Shakespeare’s life and work that should be, within its limits, complete and trustworthy.  How far my belief was justified the readers of this volume will decide.

I cannot promise my readers any startling revelations.  But my researches have enabled me to remove some ambiguities which puzzled my predecessors, and to throw light on one or two topics that have hitherto obscured the course of Shakespeare’s career.  Particulars that have not been before incorporated in Shakespeare’s biography will be found in my treatment of the following subjects: the conditions under which ‘Love’s Labour’s Lost’ and the ‘Merchant of Venice’ were written; the references in Shakespeare’s plays to his native town and county; his father’s applications to the Heralds’ College for coat-armour; his relations with Ben Jonson and the boy actors in 1601; the favour extended to his work by James I and his Court; the circumstances which led to the publication of the First Folio, and the history of the dramatist’s portraits.  I have somewhat expanded the notices of Shakespeare’s financial affairs which have already appeared in the article in the ‘Dictionary of National Biography,’ and a few new facts will be found in my revised estimate of the poet’s pecuniary position.

In my treatment of the sonnets I have pursued what I believe to be an original line of investigation.  The strictly autobiographical interpretation that critics have of late placed on these poems compelled me, as Shakespeare’s biographer, to submit them to a very narrow scrutiny.  My conclusion is adverse to the claim of the sonnets to rank as autobiographical documents, but I have felt bound, out of respect to writers from whose views I dissent, to give in detail the evidence on which I base my judgment.  Matthew Arnold sagaciously laid down the maxim that ‘the criticism which alone can much help us for the future is a criticism which regards Europe as being, for intellectual and artistic purposes, one great confederation, bound to a joint action and working to a common result.’  It is criticism inspired by this liberalising principle that is especially applicable to the vast sonnet-literature which was produced by Shakespeare and his contemporaries.  It is criticism of the type that Arnold recommended that can alone lead to any accurate and profitable conclusion respecting the intention of the vast sonnet-literature of the Elizabethan era.  In accordance with Arnold’s suggestion, I have studied Shakespeare’s sonnets comparatively with those in vogue in England, France, and Italy at the time he wrote.  I have endeavoured to learn the view that was taken of such literary endeavours by contemporary critics and readers throughout Europe.  My researches have covered a very small portion of the wide field.  But I have gone far enough, I think, to justify the conviction that Shakespeare’s collection of sonnets has no reasonable title to be regarded as a personal or autobiographical narrative....