A Lieutenant at Eighteen 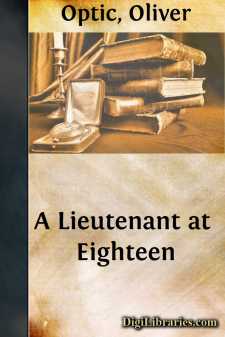 "A Lieutenant at Eighteen" is the third of the series of "The Blue and the Gray—on Land." The stirring events of thirty-four years ago, when the first gun of the Great Rebellion awoke the nation from its slumber of thirteen years of peace, transformed the older boys of the day into men. Thousands of them who lacked three or four years of their majority, and some of them even six or seven years of it, flocked to the standard of the imperilled Union. While the volunteers were in considerable numbers over the military age, those who were not yet out of their teens were earnest in their desire to be enrolled in the ranks of the loyal army, and in one way or another surmounted the obstacle of their tender age.

The youth of the hero of this volume is not contrary to the facts set forth in the official records of the States; neither does his appearance in a squadron of cavalry constitute an improbability, nor his promotion from the rank of second lieutenant to that of first lieutenant, nor even his appointment on the staff of a brigadier-general. In the rosters of three regiments of cavalry, preserved in the archives of a certain State, the name of a young man of seventeen is given as a first lieutenant; two of eighteen as captains; one of the same age as first lieutenant; and three more of that age as second lieutenants. Deck Lyon's rank, therefore, is not exceptional.

Since the close of the war many high schools in the larger cities, and many other educational institutions, have taught military drill and evolutions in their regular courses; and the students have been organized as companies, battalions, and regiments, and are thus trained in actual practice as officers, from a corporal to a colonel, and as privates, for service in the field if we should again unfortunately be involved in a war with a foreign or domestic enemy.

The important battle of Mill Springs, or Logan's Cross Roads as it is indifferently called in the official reports of the government, is introduced in the story, though not in its minute details. The Riverlawn Cavalry are present, and take part in the action, and the command of the principal character renders important service on the outskirts of the battle-field; and the squadron, either as a whole or in detachments, was busily employed. The State was overrun by lawless hordes of ruffians, of which Shaler, the latest historian of the State, writes as follows:—

"Deserters from both armies formed bands of outlaws called guerillas. These wretches, without commanders from either army, sheltered in the great forests that abound in nearly all parts of the State, were often strong enough to overcome the domestic forces, and were guilty of many outrages. They brought back to Kentucky the evils of its struggle with the Indians. Men again tilled their fields with their muskets by their sides, and slept in expectation of combat. During this and the following year these parties were hunted down, and, when captured, hanged without mercy....