A Letter From a Clergyman to his Friend, with an Account of the Travels of Captain Lemuel Gulliver 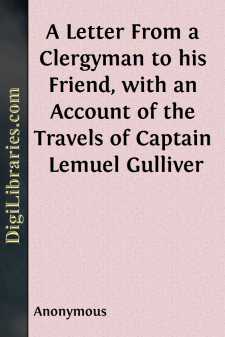 We have a Book lately publish'd here which hath of late taken up the whole conversation of the town. Tis said to be writ by Swift. It is called, The travells of Lemuell Gulliver in two Volumes. It hath had a very great sale. People differ vastly in their opinions of it, for some think it hath a great deal of wit, but others say, it hath none at all.

As Gay's letter suggests, details concerning the contemporary reception of Gulliver's Travels exhibit two sides of Jonathan Swift's character—the pleasant (that is, merry, witty, amusing) and the unpleasant (that is, sarcastic, envious, disaffected). A person with a powerful ego and astringent sense of humor, Swift must have been a delightful friend, if somewhat difficult, but also a dangerous enemy. A Letter from a Clergyman (1726), here reproduced in a facsimile of its first and only edition, is a reaction typical of those who regard Swift and the sharp edge of his satire with great suspicion and revulsion. It displays the dangerously Satanic aspect of Swift—that side of his character which for some people represented the whole man since the allegedly blasphemous satire in A Tale of a Tub, published and misunderstood early in his career, critically affected, even by his own admission, his employment in the Church. It is this evil character of the author, the priest with an indecorous and politically suspect humor, that offended some contemporary readers. To them, the engraved frontispiece of Jonathan Smedley's scurrilous Gulliveriana (1728) is the proper image of the author of the Travels. It portrays Swift in a priest's vestments that barely conceal a cloven hoof.

In the following pages, we shall define the historical context of the clergyman's Letter and illuminate the nature of the literary warfare in which Swift was an energetic if not particularly cheerful antagonist when Gulliver's Travels was published late in 1726.

In another letter, Gay remarked to Swift (17 November 1726) that "The Politicians to a man agree, that it [the Travels] is free from particular reflections"; nevertheless some "people of greater perspicuity" would "search for particular applications in every leaf." He also predicted that "we shall have keys publish'd to give light into Gulliver's design." His prediction was correct, for it was not long before four Keys, the earliest commentary in pamphlet form on the Travels, were published by a Signor Corolini, undoubtedly a pseudonym for Edmund Curll, the London printer and bookseller. But surprisingly, the observations do not exhibit Swift in a harsh factional light. As a matter of fact, in his introduction to the Keys, which are entitled Lemuel Gulliver's Travels into Several Remote Nations of the World. Compendiously Methodized, For Publick Benefit: With Observations and Explanatory Notes Throughout (1726), Curll flatters Swift as possessing "the true Vein of Humour and polite Conversation" (I, 4). Regarding the Travels, he observes, "The Town are infinitely more eager after them than they were after Robinson Crusoe" (I, 5)....