A Lecture on the Preservation of Health 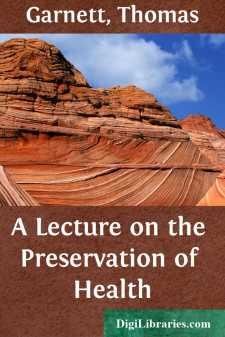 THE greatest blessing we enjoy is health, without it, wealth, honors, and every other consideration, would be insipid, and even irksome; the preservation of this state therefore, naturally concerns us all. In this lecture, I shall not attempt to teach you to become your own physicians, for when the barriers of health are once broken down, and disease has established itself, it requires the deepest attention, and an accurate acquaintance with the extensive science of medicine, to combat it; to attain this knowledge demands the labour of years. But, a majority of the diseases to which we are subject, are the effects of our own ignorance or imprudence, and it is often very easy to prevent them; mere precepts however, have seldom much effect, unless the reasoning upon them be rendered evident; on this account, I shall first endeavour, in as plain and easy a manner as possible, to explain to you the laws by which life is governed; and when we see in what health consists, we shall be better enabled to take such methods as may preserve it. Health is the easy and pleasant exercise of all the functions of the body and mind; and disease consists in the uneasy and disproportioned exercise of all, or some of the functions.

When dead matter acts upon dead matter, the only effects we perceive are mechanical, or chemical; for though there may appear to be other kinds of attraction, or repulsion, such as electric and magnetic, yet these come under the head of mechanical attraction, as producing motion; we may therefore lay it down as a law, that when dead, or inanimate bodies act upon each other, no other than mechanical, or chemical effects are produced; that is, either motion, or the decomposition, and new combination of their parts. If one ball strike another, it communicates to it a certain quantity of motion, this is called mechanical action; and if a quantity of salt, or sugar, be put into water, the particles of the salt or sugar will separate from each other, and join themselves to the particles of the water; the salt and water in these instances, are said to act on each other chemically; and in all cases whatever, in which inanimate, or dead bodies act on each other, the effects produced are, motion, or chemical attraction.

But, when dead matter acts on those bodies which we call living, the effects are much different; let us take for example a very simple instance.—Snakes, at least some species of them, pass the winter in a torpid state, which has all the appearance of death; now heat, if applied to dead matter, will only produce motion, or chemical combination; but if it be applied to the snake, let us see what will be the consequence; the reptile first begins to move, and opens its eyes and mouth; when the heat has been applied for some time, it crawls about in search of food, and performs all the functions of life. Here then, dead matter, when applied to a living body, produces living functions; for if the heat had not been applied, the snake would have continued senseless, and apparently lifeless....