A Knight of the White Cross : a tale of the siege of Rhodes 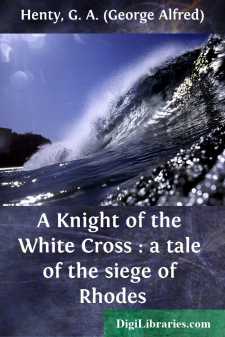 CHAPTER I The King Maker

A stately lady was looking out of the window of an apartment in the Royal Chateau of Amboise, in the month of June, 1470. She was still handsome, though many years of anxiety, misfortune, and trouble, had left their traces on her face. In the room behind her, a knight was talking to a lady sitting at a tambour frame; a lad of seventeen was standing at another window stroking a hawk that sat on his wrist, while a boy of nine was seated at a table examining the pages of an illuminated missal.

"What will come of it, Eleanor?" the lady at the window said, turning suddenly and impatiently from it. "It seems past belief that I am to meet as a friend this haughty earl, who has for fifteen years been the bitterest enemy of my House. It appears almost impossible."

"'Tis strange indeed, my Queen; but so many strange things have befallen your Majesty that you should be the last to wonder at this. At any rate, as you said but yesterday, naught but good can come of it. He has done his worst against you, and one can scarce doubt that if he chooses he has power to do as much good for you, as in past times he has done you evil. 'Tis certain that his coming here shows he is in earnest, for his presence,—which is sure sooner or later to come to the ears of the Usurper,—will cause him to fall into the deepest disgrace."

"And yet it seemed," the queen said, "that by marrying his daughter to Clarence he had bound himself more firmly than ever to the side of York."

"Ay, madam," the knight said. "But Clarence himself is said to be alike unprincipled and ambitious, and it may well be that Warwick intended to set him up against Edward; had he not done so, such an alliance would not necessarily strengthen his position at Court."

"Methinks your supposition is the true one, Sir Thomas," the queen said. "Edward cares not sufficiently for his brother to bestow much favour upon the father of the prince's wife. Thus, he would gain but little by the marriage unless he were to place Clarence on the throne. Then he would again become the real ruler of England, as he was until Edward married Elizabeth Woodville, and the House of Rivers rose to the first place in the royal favour, and eclipsed the Star of Warwick. It is no wonder the proud Earl chafes under the ingratitude of the man who owes his throne to him, and that he is ready to dare everything so that he can but prove to him that he is not to be slighted with impunity. But why come to me, when he has Clarence as his puppet?"

"He may have convinced himself, madam, that Clarence is even less to be trusted than Edward, or he may perceive that but few of the Yorkists would follow him were he to declare against the Usurper, while assuredly your adherents would stand aloof altogether from such a struggle. Powerful as he is, Warwick could not alone withstand the united forces of all the nobles pledged to the support of the House of York. Thence, as I take it, does it happen that he has resolved to throw in his lot with Lancaster, if your Majesty will but forgive the evil he has done your House and accept him as your ally....