A Journey Through France in War Time 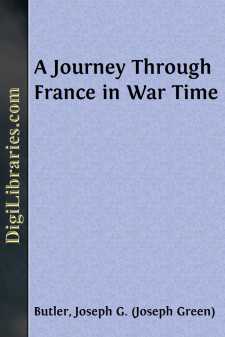 ORIGIN OF THE PURPOSE OF THE TRIP

N the Autumn and Winter of 1915, a body of distinguished and representative Frenchmen visited the United States, their object being to make an investigation of conditions here, having in mind the great need of France in war munitions, the steel in ingot and bar form very much needed for the manufacture of war materials, and the numerous other commodities necessary for prosecution of the war, which had been in progress more than a year.

The finances of France were also very much in evidence in the minds of the visitors.

The names and occupation of this French Trade Commission appear following:

This Commission visited various parts of the United States, principally the great iron and steel centers, Pittsburgh, Youngstown and Chicago.

Much attention was shown the party in their journey through our land.

An introductory luncheon to this French Commission was given by The American Manufacturers Export Association at the Hotel Biltmore, New York, Tuesday, November 23rd, 1915. This luncheon was attended by a representative number of American manufacturers and bankers, and the object of the visitors fully discussed. On this occasion it was suggested by Mr. E. V. Douglass, the efficient secretary of the Export Association, that a return visit of Americans would be in order and would assist in accomplishing the object of the visitors. This suggestion was followed up early in 1916 and took form later on in the appointment and selection of the members of "The Commission Industrielle Americaine en France", the expedition being organized and financed under the direction of The American Manufacturers' Export Association, located at 160 Broadway, New York City.

This association has an active membership of over five hundred manufacturers, firms and corporations engaged in the production of all kinds of fabricated materials, from steel to women's lingerie.

The president of the association, Mr. E. M. Herr, of Pittsburgh, closely associated with the Westinghouse interests, was the moving spirit in creating and selecting the organization and formulating the plans and policy of the Industrial Commission, even to the extent of selecting the chairman.

The membership of the commission, their occupations, business and professional status, is given herewith: