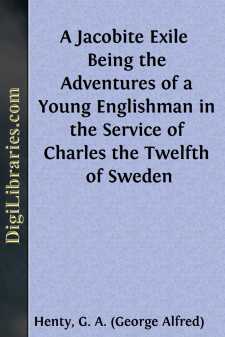 Chapter 1: A Spy in the Household.

On the borders of Lancashire and Westmoreland, two centuries since, stood Lynnwood, a picturesque mansion, still retaining something of the character of a fortified house. It was ever a matter of regret to its owner, Sir Marmaduke Carstairs, that his grandfather had so modified its construction, by levelling one side of the quadrangle, and inserting large mullion windows in that portion inhabited by the family, that it was in no condition to stand a siege, in the time of the Civil War.

Sir Marmaduke was, at that time, only a child, but he still remembered how the Roundhead soldiers had lorded it there, when his father was away fighting with the army of the king; how they had seated themselves at the board, and had ordered his mother about as if she had been a scullion, jeering her with cruel words as to what would have been the fate of her husband, if they had caught him there, until, though but eight years old, he had smitten one of the troopers, as he sat, with all his force. What had happened after that, he did not recollect, for it was not until a week after the Roundheads had ridden away that he found himself in his bed, with his mother sitting beside him, and his head bandaged with cloths dipped in water. He always maintained that, had the house been fortified, it could have held out until help arrived, although, in later years, his father assured him that it was well it was not in a position to offer a defence.

"We were away down south, Marmaduke, and the Roundheads were masters of this district, at the time. They would have battered the place around your mother's ears, and, likely as not, have burnt it to the ground. As it was, I came back here to find it whole and safe, except that the crop-eared scoundrels had, from pure wantonness, destroyed the pictures and hacked most of the furniture to pieces. I took no part in the later risings, seeing that they were hopeless, and therefore preserved my property, when many others were ruined.

"No, Marmaduke, it is just as well that the house was not fortified. I believe in fighting, when there is some chance, even a slight one, of success, but I regard it as an act of folly, to throw away a life when no good can come of it."

Still, Sir Marmaduke never ceased to regret that Lynnwood was not one of the houses that had been defended, to the last, against the enemies of the king. At the Restoration he went, for the first time in his life, to London, to pay his respects to Charles the Second. He was well received, and although he tired, in a very short time, of the gaieties of the court, he returned to Lynnwood with his feelings of loyalty to the Stuarts as strong as ever. He rejoiced heartily when the news came of the defeat of Monmouth at Sedgemoor, and was filled with rage and indignation when James weakly fled, and left his throne to be occupied by Dutch William.

From that time, he became a strong Jacobite, and emptied his glass nightly "to the king over the water." In the north the Jacobites were numerous, and at their gatherings treason was freely talked, while arms were prepared, and hidden away for the time when the lawful king should return to claim his own....