A Humorous History of England 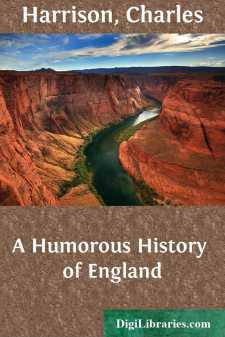 Preface“Arms and the man” was Virgil’s strain; But we propose in lighter vein

To browse a crop from pastures (Green’s) Of England’s Evolution scenes.

Who would from facts prognosticate The future progress of this State,

Must own the chiefest fact to be Her escalator is the Sea.

PrehistoricHISTORIANS erudite and sage, When writing of the past stone age,

Tell us man once was clothed in skins And tattooed patterns on his shins.

Rough bearded and with shaggy locks He lived in dug-outs in the rocks.

Was often scared and run to earth By creatures of abnormal girth:

Mammoths and monsters; truth to tell We find their names too long to spell.

He joined in little feuds no doubt; And with his weapons fashioned out

Of flint, went boldly to the fray; And cracked a skull or two per day.

By smattering of Occult law And man’s eternal sense of awe.

Note each megalithic boulder; No Monument in Europe’s older.

PhœniciansMERCHANT explorers of that day, Hustling Phœnicians, came this way

To ship tin ore from Cornish mines Three thousand years before these lines.

He wrote despatches of the best, ‘Veni, Vidi’ and the rest,

Sending the news of victory home; And flags then fluttered high in Rome.

His ‘photo’ one plain fact discloses He brought in fashion Roman noses.

Of this great General ’tis allowed The best ‘Life’ is by J. A. Froude.

For Freedom strove all she could do, ’Twas lost in A.D. sixty-two.

AgricolaThen came Agricola one day And gained a battle near the Tay.

He started trimming up this isle, And laid out roads in Roman style.

The wisdom that great Empire held; Their ignorance was thus dispelled.

Can it be wondered at when Rome Was needing help ’gainst Huns at home.

Our antiquarians often find The relics which they left behind;

A Villa here and pavement there, Coins galore and Roman ware.

Anglo-Saxons A.D. 430AND so we run our flippant rhymes Right on to Anglo-Saxon times.

Hengist and Horsa with their men Came from their Jutish pirate den,

JutesAnd paid us visits in their ships Bent on their ruthless looting trips.

And Angles landing in the Humber Gave that district little slumber.

They plundered morning, noon, and night, Were rough, uncouth, and impolite,

No ‘By your leave’ or ‘S’il vous plait’ They came to rob, remained to prey.