A House-Boat on the Styx 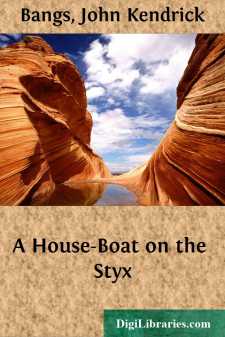 CHAPTER I: CHARON MAKES A DISCOVERY

Charon, the Ferryman of renown, was cruising slowly along the Styx one pleasant Friday morning not long ago, and as he paddled idly on he chuckled mildly to himself as he thought of the monopoly in ferriage which in the course of years he had managed to build up.

“It’s a great thing,” he said, with a smirk of satisfaction—“it’s a great thing to be the go-between between two states of being; to have the exclusive franchise to export and import shades from one state to the other, and withal to have had as clean a record as mine has been.  Valuable as is my franchise, I never corrupted a public official in my life, and—”

Here Charon stopped his soliloquy and his boat simultaneously.  As he rounded one of the many turns in the river a singular object met his gaze, and one, too, that filled him with misgiving.  It was another craft, and that was a thing not to be tolerated.  Had he, Charon, owned the exclusive right of way on the Styx all these years to have it disputed here in the closing decade of the Nineteenth Century?  Had not he dealt satisfactorily with all, whether it was in the line of ferriage or in the providing of boats for pleasure-trips up the river?  Had he not received expressions of satisfaction, indeed, from the most exclusive families of Hades with the very select series of picnics he had given at Charon’s Glen Island?  No wonder, then, that the queer-looking boat that met his gaze, moored in a shady nook on the dark side of the river, filled him with dismay.

“Blow me for a landlubber if I like that!” he said, in a hardly audible whisper.  “And shiver my timbers if I don’t find out what she’s there for.  If anybody thinks he can run an opposition line to mine on this river he’s mightily mistaken.  If it comes to competition, I can carry shades for nothing and still quaff the B. & G. yellow-label benzine three times a day without experiencing a financial panic.  I’ll show ’em a thing or two if they attempt to rival me.  And what a boat!  It looks for all the world like a Florentine barn on a canal-boat.”

Charon paddled up to the side of the craft, and, standing up in the middle of his boat, cried out,

There was no answer, and the Ferryman hailed her again.  Receiving no response to his second call, he resolved to investigate for himself; so, fastening his own boat to the stern-post of the stranger, he clambered on board.  If he was astonished as he sat in his ferry-boat, he was paralyzed when he cast his eye over the unwelcome vessel he had boarded.  He stood for at least two minutes rooted to the spot.  His eye swept over a long, broad deck, the polish of which resembled that of a ball-room floor.  Amidships, running from three-quarters aft to three-quarters forward, stood a structure that in its lines resembled, as Charon had intimated, a barn, designed by an architect enamoured of Florentine simplicity; but in its construction the richest of woods had been used, and in its interior arrangement and adornment nothing more palatial could be conceived....