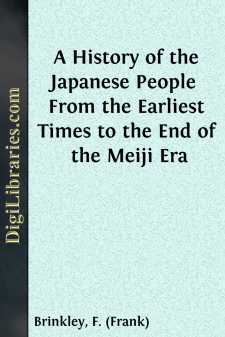 CHAPTER I THE HISTORIOGRAPHER'S ART IN OLD JAPAN MATERIALS FOR HISTORY

IN the earliest eras of historic Japan there existed a hereditary corporation of raconteurs (Katari-be) who, from generation to generation, performed the function of reciting the exploits of the sovereigns and the deeds of heroes. They accompanied themselves on musical instruments, and naturally, as time went by, each set of raconteurs embellished the language of their predecessors, adding supernatural elements, and introducing details which belonged to the realm of romance rather than to that of ordinary history. These Katari-be would seem to have been the sole repository of their country's annals until the sixth century of the Christian era. Their repertories of recitation included records of the great families as well as of the sovereigns, and it is easy to conceive that the favour and patronage of these high personages were earned by ornamenting the traditions of their households and exalting their pedigrees. But when the art of writing was introduced towards the close of the fourth century, or at the beginning of the fifth, and it was seen that in China, then the centre of learning and civilization, the art had been applied to the compilation of a national history as well as of other volumes possessing great ethical value, the Japanese conceived the ambition of similarly utilizing their new attainment. For reasons which will be understood by and by, the application of the ideographic script to the language of Japan was a task of immense difficulty, and long years must have passed before the attainment of any degree of proficiency.

Thus it was not until the time of the Empress Suiko (593-628) that the historical project took practical shape. Her Majesty, at the instance, doubtless, of Prince Shotoku, one of the greatest names in all Japan's annals, instructed the prince himself and her chief minister, Soga no Umako, to undertake the task of compiling historical documents, and there resulted a Record of the Emperors (Tennoki), a Record of the Country (Koki), and Original Records (Hongi) of the Free People (i.e., the Japanese proper as distinguished from aliens, captives, and aborigines), of the great families and of the 180 Hereditary Corporations (Be). This work was commenced in the year 620, but nothing is known as to the date of its completion. It represents the first Japanese history. A shortlived compilation it proved, for in the year 645, the Soga chiefs, custodians of the documents, threw them into the fire on the eve of their own execution for treason. One only, the Record of the Country, was plucked from the flames, and is believed to have been subsequently incorporated in the Kojiki '(Records of Ancient Things).' No immediate attempt seems to have been made to remedy the loss of these invaluable writings. Thirty-seven years later the Emperor Temmu took the matter in hand. One of his reasons for doing so has been historically transmitted. Learning that "the chronicles of the sovereigns and the original words in the possession of the various families deviated from the truth and were largely amplified with empty falsehoods," his Majesty conceived that unless speedy steps were taken to correct the confusion and eliminate the errors, an irremediable state of affairs would result....