A History of Sea Power 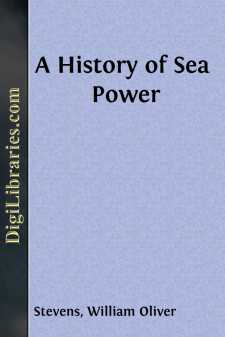 THE BEGINNINGS OF NAVIES

Civilization and sea power arose from the Mediterranean, and the progress of recent archeological research has shown that civilizations and empires had been reared in the Mediterranean on sea power long before the dawn of history. Since the records of Egypt are far better preserved than those of any other nation of antiquity, and the discovery of the Rosetta stone has made it possible to read them, we know most about the beginnings of civilization in Egypt. We know, for instance, that an Egyptian king some 2000 years before Christ possessed a fleet of 400 fighting ships. But it appears now that long before this time the island of Crete was a great naval and commercial power, that in the earliest dynasties of Egypt Cretan fleets were carrying on a commerce with the Nile valley. Indeed, the Cretans may have taught the Egyptians something of the art of building sea-going ships for trade and war.[1] At all events, Crete may be regarded as the first great sea power of history, an island empire like Great Britain to-day, extending its influence from Sicily to Palestine and dominating the eastern Mediterranean for many centuries. From recent excavations of the ancient capital we get an interesting light on the old Greek legends of the Minotaur and Page 16 the Labyrinth, going back to the time when the island kingdom levied tribute, human as well as monetary, on its subject cities throughout the Ægean.

[Footnote 1: It is interesting to note that the earliest empires, Assyria and Egypt, were not naval powers, because they arose in rich river valleys abundantly capable of sustaining their inhabitants. They did not need to command the sea.]

On this sea power Crete reared an astonishingly advanced civilization. Until recent times, for instance, the Phœnicians had been credited with the invention of the alphabet. We know now that 1000 years before the Phœnicians began to write the Cretans had evolved a system of written characters—as yet undeciphered—and a decimal system for numbers. A correspondingly high stage of excellence had been reached in engineering, architecture, and the fine arts, and even in decay Crete left to Greece the tradition of mastery in laws and government.

The power of Crete was already in its decline centuries before the Trojan War, but during a thousand years it had spread its own and Egyptian culture over the shores of the Ægean. The destruction of the island empire in about 1400 B.C. apparently was due to some great disaster that destroyed her fleet and left her open to invasion by a conquering race—probably the Greeks—who ravaged her cities by sword and fire. On account of her commanding position in the Mediterranean, Crete might again have risen to sea power but for the endless civil wars that marked her subsequent history.

The successor to Crete as mistress of the sea was Phœnicia. The Phœnicians, oddly enough, were a Semitic people, a Page 17 nomadic race with no traditions of the sea whatever....