A History of Science - Volume 4 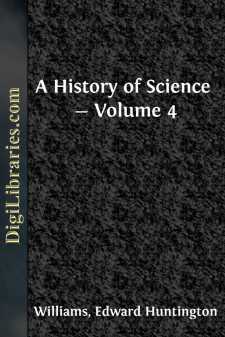 I. THE PHLOGISTON THEORY IN CHEMISTRY

The development of the science of chemistry from the "science" of alchemy is a striking example of the complete revolution in the attitude of observers in the field of science. As has been pointed out in a preceding chapter, the alchemist, having a preconceived idea of how things should be, made all his experiments to prove his preconceived theory; while the chemist reverses this attitude of mind and bases his conceptions on the results of his laboratory experiments. In short, chemistry is what alchemy never could be, an inductive science. But this transition from one point of view to an exactly opposite one was necessarily a very slow process. Ideas that have held undisputed sway over the minds of succeeding generations for hundreds of years cannot be overthrown in a moment, unless the agent of such an overthrow be so obvious that it cannot be challenged. The rudimentary chemistry that overthrew alchemy had nothing so obvious and palpable.

The great first step was the substitution of the one principle, phlogiston, for the three principles, salt, sulphur, and mercury. We have seen how the experiment of burning or calcining such a metal as lead "destroyed" the lead as such, leaving an entirely different substance in its place, and how the original metal could be restored by the addition of wheat to the calcined product. To the alchemist this was "mortification" and "revivification" of the metal. For, as pointed out by Paracelsus, "anything that could be killed by man could also be revivified by him, although this was not possible to the things killed by God." The burning of such substances as wood, wax, oil, etc., was also looked upon as the same "killing" process, and the fact that the alchemist was unable to revivify them was regarded as simply the lack of skill on his part, and in no wise affecting the theory itself.

But the iconoclastic spirit, if not the acceptance of all the teachings, of the great Paracelsus had been gradually taking root among the better class of alchemists, and about the middle of the seventeenth century Robert Boyle (1626-1691) called attention to the possibility of making a wrong deduction from the phenomenon of the calcination of the metals, because of a very important factor, the action of the air, which was generally overlooked. And he urged his colleagues of the laboratories to give greater heed to certain other phenomena that might pass unnoticed in the ordinary calcinating process. In his work, The Sceptical Chemist, he showed the reasons for doubting the threefold constitution of matter; and in his General History of the Air advanced some novel and carefully studied theories as to the composition of the atmosphere. This was an important step, and although Boyle is not directly responsible for the phlogiston theory, it is probable that his experiments on the atmosphere influenced considerably the real founders, Becker and Stahl.

Boyle gave very definitely his idea of how he thought air might be composed. "I conjecture that the atmospherical air consists of three different kinds of corpuscles," he says; "the first, those numberless particles which, in the form of vapors or dry exhalations, ascend from the earth, water, minerals, vegetables, animals, etc.; in a word, whatever substances are elevated by the celestial or subterraneal heat, and thence diffused into the atmosphere....