A History of Nursery Rhymes

by Percy B. Green 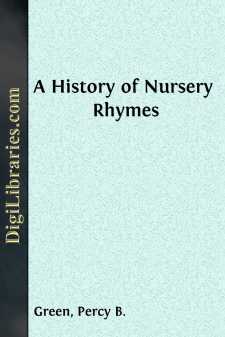 Scientists tell us many marvellous tales, none the less true because marvellous, about the prehistoric past. Like the owl in the preface, they are not discouraged because the starting-point is beyond reach; and we, like the cat, should try to awaken our interest when evidences are presented to us that on first hearing sound like the wonderful tales of the Orient.

Thousands of years ago in our own land dwelt two races of people, the River Drift-men and the Cave-dwellers. The River Drift-man was a hunter of a very low order, possessing only the limited intelligence of the modern Australian native. This man supported life much in the same way we should expect a man to do, surrounded by similar conditions; but, on the other hand, the Cave-dweller showed a singular talent for representing the animals he hunted, and his sketches reveal to us the capacity he had for seeing the beauty and grace of natural objects. Were a visit to be paid to the British Museum, his handicraft, rude when compared to modern art, could be seen in the fragments beyond all cavil recording his primitive culture.

Without, then, any very great stretch of imagination we can picture to ourselves this man as belonging to one of the most primitive types of our race, having little occasion to use a vocabulary—save of a most meagre order; and indeed his language would embody only a supply of words just expressive of his few simple wants. Without daring to compare primitive culture with modern advancement, this prototype's appetites would have been possibly served for the greater part by sign-language, and the use of a few easy protophones. To-day, after the lapse of ages since this Second Stone Age, man went up and possessed the land; we with our new inventions, wants, and newly-acquired tastes have added a legion of scientifically constructed sounds, built up on the foundation he laid with his first utterances, for language is not the outcome of race, but of social contact. As an interpolation the tale of the Egyptian Psammetichus is worth telling at this stage.

Desirous of finding—as the ancients then thought existed—the original language of mankind, Psammetichus isolated two babies from birth in separate apartments, and for two years they were not allowed to hear the sound of a human voice. At the end of that time they were brought together and kept for a few hours without food. Psammetichus then entered the room, and both children uttered the same strange cry, "Becos, Becos." "Ah!" said Psammetichus, "'Becos, Becos,' why! that is Phrygian for bread," and Phrygian was said to have been the ancient universal language of man. Still, however one feels disposed to imagine what took place in the Baby Kingdom of these remote ages, brief allusions only will be made to the veiled past, when either sign-language, or relics, or myths of long descent are presented to us in the form of nursery-lore.

How many thousands of years have gone by since the period known to scientists as the Pleistocene was here—a time when the whole of Britain and North-West Europe wore a glistening mantle of ice, and when man could scarce exist, save on the fringe of the south-east littoral of England—none can say....