A History of English Romanticism in the Nineteenth Century 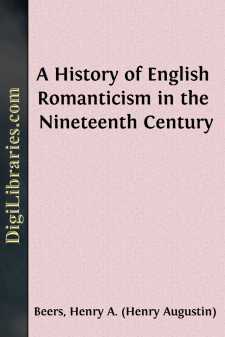 It was reserved for Walter Scott, "the Ariosto of the North," "the historiographer royal of feudalism," to accomplish the task which his eighteenth-century forerunners had essayed in vain. He possessed the true enchanter's wand, the historic imagination. With this in his hand, he raised the dead past to life, made it once more conceivable, made it even actual. Before Scott no genius of the highest order had lent itself wholly or mainly to retrospection. He is the middle point and the culmination of English romanticism. His name is, all in all, the most important on our list. "Towards him all the lines of the romantic revival converge." [2] The popular ballad, the Gothic romance, the Ossianic poetry, the new German literature, the Scandinavian discoveries, these and other scattered rays of influence reach a focus in Scott. It is true that his delineation of feudal society is not final. There were sides of mediaeval life which he did not know, or understand, or sympathize with, and some of these have been painted in by later artists. That his pictures have a coloring of modern sentiment is no arraignment of him but of the genre. All romanticists are resurrectionists; their art is an elaborate make-believe. It is enough for their purpose if the world which they re-create has the look of reality, the verisimile if not the verum. That Scott's genius was in extenso rather than in intenso, that his work is largely improvisation, that he was not a miniature, but a distemper painter, splashing large canvasses with a coarse brush and gaudy pigments, all these are commonplaces of criticism. Scott's handling was broad, vigorous, easy, careless, healthy, free. He was never subtle, morbid, or fantastic, and had no niceties or secrets. He was, as Coleridge said of Schiller, "master, not of the intense drama of passion, but the diffused drama of history." Therefore, because his qualities were popular and his appeal was made to the people, the general reader, he won a hearing for his cause, which Coleridge or Keats or Tieck, with his closer workmanship, could never have won. He first and he alone popularised romance. No literature dealing with the feudal past has ever had the currency and the universal success of Scott's. At no time has mediaevalism held so large a place in comparison with other literary interests as during the years of his greatest vogue, say from 1805 to 1830.

The first point to be noticed about Scott is the thoroughness of his equipment. While never a scholar in the academic sense, he was, along certain chosen lines, a really learned man. He was thirty-four when he published "The Lay of the Last Minstrel" (1805), the first of his series of metrical romances and the first of his poems to gain popular favour. But for twenty years he had been storing his mind with the history, legends, and ballad poetry of the Scottish border, and was already a finished antiquarian. The bent and limitations of his genius were early determined, and it remained to the end wonderfully constant to its object....