A History of Aeronautics 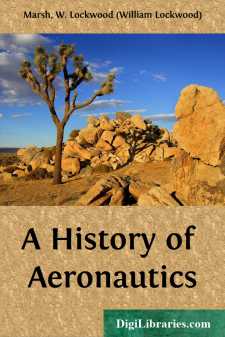 I. THE PERIOD OF LEGEND

The blending of fact and fancy which men call legend reached its fullest and richest expression in the golden age of Greece, and thus it is to Greek mythology that one must turn for the best form of any legend which foreshadows history. Yet the prevalence of legends regarding flight, existing in the records of practically every race, shows that this form of transit was a dream of many peoples—man always wanted to fly, and imagined means of flight.

In this age of steel, a very great part of the inventive genius of man has gone into devices intended to facilitate transport, both of men and goods, and the growth of civilisation is in reality the facilitation of transit, improvement of the means of communication. He was a genius who first hoisted a sail on a boat and saved the labour of rowing; equally, he who first harnessed ox or dog or horse to a wheeled vehicle was a genius—and these looked up, as men have looked up from the earliest days of all, seeing that the birds had solved the problem of transit far more completely than themselves. So it must have appeared, and there is no age in history in which some dreamers have not dreamed of the conquest of the air; if the caveman had left records, these would without doubt have showed that he, too, dreamed this dream. His main aim, probably, was self-preservation; when the dinosaur looked round the corner, the prehistoric bird got out of the way in his usual manner, and prehistoric man, such of him as succeeded in getting out of the way after his fashion—naturally envied the bird, and concluded that as lord of creation in a doubtful sort of way he ought to have equal facilities. He may have tried, like Simon the Magician, and other early experimenters, to improvise those facilities; assuming that he did, there is the groundwork of much of the older legend with regard to men who flew, since, when history began, legends would be fashioned out of attempts and even the desire to fly, these being compounded of some small ingredient of truth and much exaggeration and addition.

In a study of the first beginnings of the art, it is worth while to mention even the earliest of the legends and traditions, for they show the trend of men's minds and the constancy of this dream that has become reality in the twentieth century. In one of the oldest records of the world, the Indian classic Mahabarata, it is stated that 'Krishna's enemies sought the aid of the demons, who built an aerial chariot with sides of iron and clad with wings. The chariot was driven through the sky till it stood over Dwarakha, where Krishna's followers dwelt, and from there it hurled down upon the city missiles that destroyed everything on which they fell.' Here is pure fable, not legend, but still a curious forecast of twentieth century bombs from a rigid dirigible. It is to be noted in this case, as in many, that the power to fly was an attribute of evil, not of good—it was the demons who built the chariot, even as at Friedrichshavn. Mediaeval legend in nearly every case, attributes flight to the aid of evil powers, and incites well-disposed people to stick to the solid earth—though, curiously enough, the pioneers of medieval times were very largely of priestly type, as witness the monk of Malmesbury....