A Hilltop on the Marne Being Letters Written June 3-September 8, 1914 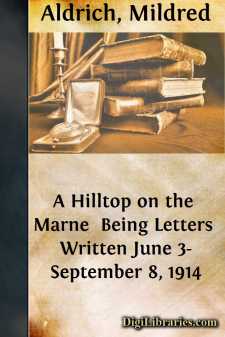 I said it was, very, and wet in the dryest weather.

"Wooded all the way?" he asked.

I told him that it was, and, what was more, so winding that you could not see ten feet ahead anywhere between here and Conde.

"Humph," he said. "Perfectly clear, thank you very much. Please wait right there a moment."

He looked up the hill behind him, and made a gesture in the air with his hand above his head. I turned to look up the hill also. I saw the corporal at the gate repeat the gesture; then a big bicycle corps, four abreast, guns on their backs, slid round the corner and came gliding down the hill. There was not a sound, not the rattle of a chain or a pedal.

"Thank you very much," said the captain. "Be so kind as to keep close to the bank."

When I reached my gate I found some of the men of the guard dragging a big, long log down the road, and I watched them while they attached it to a tree at my gate, and swung it across to the opposite side of the road, making in that way a barrier about five feet high. I asked what that was for? "Captain's orders," was the laconic reply. But when it was done the corporal took the trouble to explain that it was a barricade to prevent the Germans from making a dash up the hill.

"However," he added, "don't you get nervous. If we chase them out it will only be a little rifle practice, and I doubt if they even have any ammunition."

As I turned to go into the house, he called after me,—

"See here, I notice that you've got doors on all sides of your house. Better lock all those but this front one."

As all the windows were barred and so could be left open, I didn't mind; so I went in and locked up. The thing was getting to be funny to me,—always doing something, and nothing happening. I suppose courage is a cumulative thing, if only one has time to accumulate, and these boys in khaki treated even the cannonading as if it were all "in the day's work."

It was just dusk when the bicycle corps returned up the hill. They had to dismount and wheel their machines under the barricade, and they did it so prettily, dismounting and remounting with a precision that was neat.

"Nothing," reported the captain. "We could not go in far,—road too rough and too dangerous. It is a cavalry job."

All the same, I am sure the Uhlans are there.

I had gone to bed early on Friday night, and had passed an uneasy night. It was before four when I got up and opened my shutters. It was a lovely day. Perhaps I have told you that the weather all last week was simply perfect.

I went downstairs to get coffee for the picket, but when I got out to the gate there was no picket there. There was the barricade, but the road was empty. I ran up the road to Amelie's. She told me that they had marched away about an hour before. A bicyclist had evidently brought an order. As no one spoke English, no one understood what had really happened. Pere had been to Couilly—they had all left there. So far as any one could discover there was not an English soldier, or any kind of a soldier, left anywhere in the commune....