A Hazard of New Fortunes - Volume 2 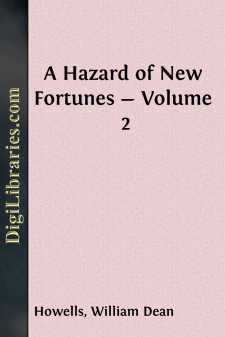 The evening when March closed with Mrs. Green's reduced offer, and decided to take her apartment, the widow whose lodgings he had rejected sat with her daughter in an upper room at the back of her house. In the shaded glow of the drop-light she was sewing, and the girl was drawing at the same table. From time to time, as they talked, the girl lifted her head and tilted it a little on one side so as to get some desired effect of her work.

"It's a mercy the cold weather holds off," said the mother. "We should have to light the furnace, unless we wanted to scare everybody away with a cold house; and I don't know who would take care of it, or what would become of us, every way."

"They seem to have been scared away from a house that wasn't cold," said the girl. "Perhaps they might like a cold one. But it's too early for cold yet. It's only just in the beginning of November."

"The Messenger says they've had a sprinkling of snow."

"Oh yes, at St. Barnaby! I don't know when they don't have sprinklings of snow there. I'm awfully glad we haven't got that winter before us."

The widow sighed as mothers do who feel the contrast their experience opposes to the hopeful recklessness of such talk as this. "We may have a worse winter here," she said, darkly.

"Then I couldn't stand it," said the girl, "and I should go in for lighting out to Florida double-quick."

"And how would you get to Florida?" demanded her mother, severely.

"Oh, by the usual conveyance Pullman vestibuled train, I suppose. What makes you so blue, mamma?" The girl was all the time sketching away, rubbing out, lifting her head for the effect, and then bending it over her work again without looking at her mother.

"I am not blue, Alma. But I cannot endure this—this hopefulness of yours."

Pending the effort she must make in saying, the girl cut in: "Yes, harm. You've kept your despair dusted off and ready for use at an instant's notice ever since we came, and what good has it done? I'm going to keep on hoping to the bitter end. That's what papa did."

It was what the Rev. Archibald Leighton had done with all the consumptive's buoyancy. The morning he died he told them that now he had turned the point and was really going to get well. The cheerfulness was not only in his disease, but in his temperament. Its excess was always a little against him in his church work, and Mrs. Leighton was right enough in feeling that if it had not been for the ballast of her instinctive despondency he would have made shipwreck of such small chances of prosperity as befell him in life. It was not from him that his daughter got her talent, though he had left her his temperament intact of his widow's legal thirds. He was one of those men of whom the country people say when he is gone that the woman gets along better without him. Mrs. Leighton had long eked out their income by taking a summer boarder or two, as a great favor, into her family; and when the greater need came, she frankly gave up her house to the summer-folks (as they call them in the country), and managed it for their comfort from the small quarter of it in which she shut herself up with her daughter.

The notion of shutting up is an exigency of the rounded period. The fact is, of course, that Alma Leighton was not shut up in any sense whatever. She was the pervading light, if not force, of the house. She was a good cook, and she managed the kitchen with the help of an Irish girl, while her mother looked after the rest of the housekeeping....