A Hazard of New Fortunes - Complete 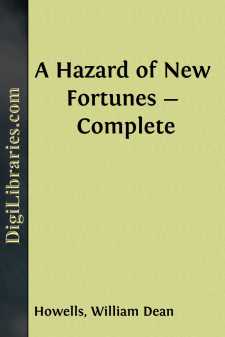 The following story was the first fruit of my New York life when I began to live it after my quarter of a century in Cambridge and Boston, ending in 1889; and I used my own transition to the commercial metropolis in framing the experience which was wholly that of my supposititious literary adventurer. He was a character whom, with his wife, I have employed in some six or eight other stories, and whom I made as much the hero and heroine of 'Their Wedding Journey' as the slight fable would bear. In venturing out of my adoptive New England, where I had found myself at home with many imaginary friends, I found it natural to ask the company of these familiar acquaintances, but their company was not to be had at once for the asking. When I began speaking of them as Basil and Isabel, in the fashion of 'Their Wedding Journey,' they would not respond with the effect of early middle age which I desired in them. They remained wilfully, not to say woodenly, the young bridal pair of that romance, without the promise of novel functioning. It was not till I tried addressing them as March and Mrs. March that they stirred under my hand with fresh impulse, and set about the work assigned them as people in something more than their second youth.

The scene into which I had invited them to figure filled the largest canvas I had yet allowed myself; and, though 'A Hazard of New Fortunes was not the first story I had written with the printer at my heels, it was the first which took its own time to prescribe its own dimensions. I had the general design well in mind when I began to write it, but as it advanced it compelled into its course incidents, interests, individualities, which I had not known lay near, and it specialized and amplified at points which I had not always meant to touch, though I should not like to intimate anything mystical in the fact. It became, to my thinking, the most vital of my fictions, through my quickened interest in the life about me, at a moment of great psychological import. We had passed through a period of strong emotioning in the direction of the humaner economics, if I may phrase it so; the rich seemed not so much to despise the poor, the poor did not so hopelessly repine. The solution of the riddle of the painful earth through the dreams of Henry George, through the dreams of Edward Bellamy, through the dreams of all the generous visionaries of the past, seemed not impossibly far off. That shedding of blood which is for the remission of sins had been symbolized by the bombs and scaffolds of Chicago, and the hearts of those who felt the wrongs bound up with our rights, the slavery implicated in our liberty, were thrilling with griefs and hopes hitherto strange to the average American breast. Opportunely for me there was a great street-car strike in New York, and the story began to find its way to issues nobler and larger than those of the love-affairs common to fiction. I was in my fifty-second year when I took it up, and in the prime, such as it was, of my powers. The scene which I had chosen appealed prodigiously to me, and the action passed as nearly without my conscious agency as I ever allow myself to think such things happen.

The opening chapters were written in a fine, old fashioned apartment house which had once been a family house, and in an uppermost room of which I could look from my work across the trees of the little park in Stuyvesant Square to the towers of St. George's Church. Then later in the spring of 1889 the unfinished novel was carried to a country house on the Belmont border of Cambridge. There I must have written very rapidly to have pressed it to conclusion before the summer ended. It came, indeed, so easily from the pen that I had the misgiving which I always have of things which do not cost me great trouble.

There is nothing in the book with which I amused myself more than the house-hunting of the Marches when they were placing themselves in New York; and if the contemporary reader should turn for instruction to the pages in which their experience is detailed I assure him that he may trust their fidelity and accuracy in the article of New York housing as it was early in the last decade of the last century: I mean, the housing of people of such moderate means as the Marches....