A Handful of Stars Texts That Have Moved Great Minds 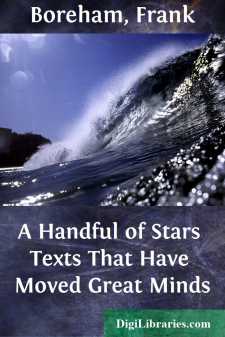 The Algonquin chiefs are gathered in solemn conclave. They make a wild and striking and picturesque group. They are assembled under the wide-spreading branches of a giant elm, not far from the banks of the Delaware. It is easy to see that something altogether unusual is afoot. Ranging themselves in the form of a crescent, these men of scarred limbs and fierce visage fasten their eyes curiously upon a white man who, standing against the bole of the elm, comes to them as white man never came before. He is a young man of about eight and thirty, wearing about his lithe and well-knit figure a sash of skyblue silk. He is tall, handsome and of commanding presence. His movements are easy, agile and athletic; his manner is courtly, graceful and pleasing; his voice, whilst deep and firm, is soft and agreeable; his face inspires instant confidence. He has large lustrous eyes which seem to corroborate and confirm every word that falls from his lips. These tattooed warriors read him through and through, as they have trained themselves to do, and they feel that they can trust him. In his hand he holds a roll of parchment. For this young man in the skyblue sash is William Penn. He is making his famous treaty with the Indians. It is one of the most remarkable instruments ever completed. 'It is the only treaty,' Voltaire declares, 'that was ever made without an oath, and the only treaty that never was broken.' By means of this treaty with the Indians, William Penn is beginning to realize the greatest aspiration of his life. For William Penn has set his heart on being the Conqueror of the World!

Strangely enough, it was a Quaker who fired the young man's fancy with this proud ambition. Thomas Loe was William Penn's good angel. There seemed to be no reason why their paths should cross, yet their paths were always crossing. A subtle and inexplicable magnetism drew them together. Penn's father--Sir William Penn--was an admiral, owning an estate in Ireland. When William was but a small boy, Thomas Loe visited Cork. The coming of the Quaker caused a mild sensation; nobody knew what to make of it. Moved largely by curiosity, the admiral invited the quaint preacher to visit him. He did so, and, before leaving, addressed the assembled household. William was too young to understand, but he was startled when, in the midst of the address, a colored servant wept aloud. The boy turned in his astonishment to his father, only to notice that tears were making their way down the bronzed cheeks of the admiral. The incident filled him with wonder and perplexity. He never forgot it. It left upon his mind an indelible impression of the intense reality of all things spiritual. As a schoolboy, he would wander in the forests that so richly surrounded his Essex home, and give himself to rapt and silent contemplation. On one occasion, he tells us, he 'was suddenly surprised with an inward comfort.' It seemed to him as if a heavenly glory irradiated the room in which he was sitting. He felt that he could never afterwards doubt the existence of God nor question the possibility of the soul's access to Him....