A Handbook to Agra and the Taj Sikandra, Fatehpur-Sikri and the Neighbourhood 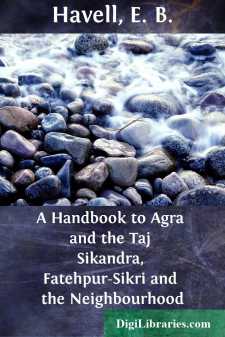 Agra has two histories: one of the ancient city on the east, or left, bank of the river Jumna, going back so far as to be lost in the legends of Krishna and of the heroes of the Mâhabhârata; the other of the modern city, founded by Akbar in A.D. 1558, on the right bank of the river, and among Muhammadans still retaining its name of Akbarabad, which is intimately associated with the romance of the Great Moguls, and known throughout the world as the city of the Taj.

Of ancient Agra little now remains except a few traces of the foundations. It was a place of importance under various Hindu dynasties previous to the Muhammadan invasions of India, but its chequered fortunes down to the beginning of the sixteenth century are the usual tale of siege and capture by Hindu or Mussulman, and possess little historical interest.

In A.D. 1505 Sultan Sikandar Lodi, the last but one of the Afghan dynasty at Delhi, rebuilt Agra and made it the seat of government. Sikandra, the burial-place of Akbar, is named after him, and there he built a garden-house which subsequently became the tomb of Mariam Zâmâni, one of Akbar's wives. The son of Sultan Sikandar, Ibrahim Lodi, was defeated and slain by Babar at Panipat, near Delhi, in 1526, and from that time Agra became one of the principal cities of the Mogul Empire which Babar founded.

Though very few memorials of Babar's short but brilliant reign still exist at Agra, the life of this remarkable man is so important a part of the Mogul dynasty that it must not be passed over by the intelligent tourist or student of Mogul art. It was Babar's sunny disposition, and the love of nature characteristic of his race, that brought back into Indian art the note of joyousness which it had not known since the days of Buddhism. Babar is one of the most striking figures in Eastern history. He was descended from Tamerlane, or Timur, on his father's side, and, on his mother's, from Chinghiz Khan. In the year 1494, at the age of twelve, he became king of Farghana, a small kingdom of Central Asia, now known as Kokand. His sovereignty, however, was of a very precarious tenure, for he was surrounded on all sides by a horde of rapacious, intriguing relatives, scrambling for the fragments of Timur's empire. With hardly a trustworthy ally except a remarkably clever and courageous old grandmother, he struggled for three years to retain his birthright. Then, acting on a sudden inspiration, he made a dash for Samarkand, the ancient capital of Timur, and won it. In his delightful memoirs Babar describes how, with boyish glee, he paced the ramparts himself, wandered from palace to palace, and revelled in the fruit-gardens of what was then one of the finest cities of Asia. But in less than a hundred days, most of his shifty Mongol troops, disappointed in not finding as much booty as they expected, deserted and joined a party of his enemies, who straightway attacked Andijan, the capital of Farghana, where Babar had left his mother and grandmother....