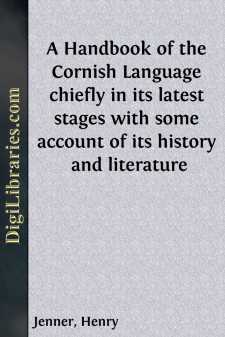 This book is principally intended for those persons of Cornish nationality who wish to acquire some knowledge of their ancient tongue, and to read, write, and perhaps even to speak it.  Its aim is to represent in an intelligible form the Cornish of the later period, and since it is addressed to the general Cornish public rather than to the skilled philologist, much has been left unsaid that might have been of interest to the latter, old-fashioned phonological and grammatical terms have been used, a uniform system of spelling has been adopted, little notice has been taken of casual variations, and the arguments upon which the choice of forms has been based have not often been given.

The spelling has been adapted for the occasion.  All writers of Cornish used to spell according to their own taste and fancy, and would sometimes represent the same word in different ways even in the same page, though certain general principles were observed in each period.  There was a special uncertainty about the vowels, which will be easily appreciated by those who are familiar with Cornish English.  Modern writers of all languages prefer consistent spelling, and to modern learners, whose object is linguistic rather than philological, a fairly regular system of orthography is almost a necessity.  The present system is not the phonetic ideal of “one sound to each symbol, and one symbol for each sound,” but it aims at being fairly consistent with itself, not too difficult to understand, not too much encumbered with diacritical signs, and not too startlingly different from the spellings of earlier times, especially from that of Lhuyd, whose system was constructed from living Cornish speakers.  The writer has arrived at his conclusions by a comparison of the various existing spellings with one another, with the traditional fragments collected and recorded by himself in 1875, with the modern pronunciation of Cornish names, with the changes which English has undergone in the mouths of the less educated of Cornishmen, and to some extent with Breton.  The author suggests that this form of spelling should be generally adopted by Cornish students of their old speech.  The system cannot in the nature of things be strictly accurate, but it is near enough for practical purposes.  Possibly there is much room for controversy, especially as to such details as the distribution of long and short vowels, the representation of the Middle Cornish u, ue, eu sometimes by î, sometimes by ê, and sometimes by eu or ew, or of the Middle Cornish y by i, e, or y, or occasionally by an obscure Г„Ж’, Г…ВЏ, or Г…­, and it is quite likely that others might arrive at different conclusions from the same evidence, though those conclusions might not be any the nearer to the sounds which the Cornishmen of the seventeenth and eighteenth centuries really did make.  As for grammatical forms, it will be seen that the writer is of opinion that the difference between Middle and Modern Cornish was more apparent than real, and that except in the very latest period of all, when the language survived only in the mouths of the least educated persons, the so-called “corruptions” were to a great extent due to differences of spelling, to a want of appreciation of almost inaudible final consonants, and to an intensification of phonetic tendencies existing in germ at a much earlier period.  Thus it is that inflections which in the late Cornish often seem to have been almost, if not quite, inaudible, have been written in full, for that is the author’s notion, founded on what Middle Cornishmen actually did write, of what Modern Cornishmen were trying to express.  For most things he has precedents, though he has allowed himself a certain amount of conjecture at times, and in most cases of difficulty he has trusted, as he would advise his readers to do, to Breton rather than to Welsh, for the living Breton of to-day is the nearest thing to Cornish that exists.

Why should Cornishmen learn Cornish?  There is no money in it, it serves no practical purpose, and the literature is scanty and of no great originality or value.  The question is a fair one, the answer is simple.  Because they are Cornishmen.  At the present day Cornwall, but for a few survivals of Duchy jurisdictions, is legally and practically a county of England, with a County Council, a County Police, and a Lord-Lieutenant all complete, as if it were no better than a mere Essex or Herts....