A Handbook of Laboratory Glass-Blowing 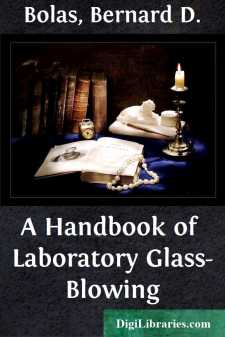 Glass-blowing is neither very easy nor very difficult; there are operations so easy that the youngest laboratory boy should be able to repeat them successfully after once having been shown the way, there are operations so difficult that years are needed to train eye and hand and judgment to carry them out; but the greater number of scientific needs lie between these two extremes. Yet a surprisingly large number of scientific workers fail even to join a glass tube or make a T piece that will not crack spontaneously, and the fault is rather one of understanding than of lack of ability to carry out the necessary manipulation.

In following the scheme of instruction adopted in this handbook, it will be well for the student to pay particular attention to the reason given for each detail of the desirable procedure, and, as far as may be, to memorise it. Once having mastered the underlying reason, he can evolve schemes of manipulation to suit his own particular needs, although, as a rule, those given in the following pages will be found to embody the result of many years' experience.

There is a wide choice of apparatus, from a simple mouth-blowpipe and a candle flame to a power-driven blower and a multiple-jet heating device. All are useful, and all have their special applications, but, for the present, we will consider the ordinary types of bellows and blowpipes, such as one usually finds in a chemical or physical laboratory.

The usual, or Herepath, type of gas blowpipe consists of an outer tube through which coal gas can be passed and an inner tube through which a stream of air may be blown. Such a blowpipe is shown in section by Fig. 1. It is desirable to have the three centring screws as shown, in order to adjust the position of the air jet and obtain a well-shaped flame, but these screws are sometimes omitted. Fig. 1, a and b show the effects of defective centring of the air jet, c shows the effect of dirt or roughness in the inside of the air jet, d shows a satisfactory flame.

For many purposes, it is an advantage to have what is sometimes known as a "quick-change" blowpipe; that is one in which jets of varying size may be brought into position without stopping the work for more than a fraction of a second. Such a device is made by Messrs. Letcher, and is shown by e, and in section by f Fig. 1. It is only necessary to rotate the desired jet into position in order to connect it with both gas and air supplies. A small bye-pass ignites the gas, and adjustment of gas and air may be made by a partial rotation of the cylinder which carries the jets.

For specially heavy work, where it is needed to heat a large mass of glass, a multiple blowpipe jet of the pattern invented by my father, Thomas Bolas, as the result of a suggestion derived from a study of the jet used in Griffin's gas furnace, is of considerable value....