A Half-Century of Conflict - Volume II 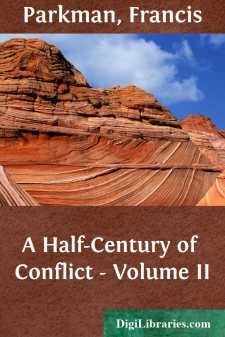 The occupation by France of the lower Mississippi gave a strong impulse to the exploration of the West, by supplying a base for discovery, stimulating enterprise by the longing to find gold mines, open trade with New Mexico, and get a fast hold on the countries beyond the Mississippi in anticipation of Spain; and to these motives was soon added the hope of finding an overland way to the Pacific. It was the Canadians, with their indomitable spirit of adventure, who led the way in the path of discovery.

As a bold and hardy pioneer of the wilderness, the Frenchman in America has rarely found his match. His civic virtues withered under the despotism of Versailles, and his mind and conscience were kept in leading-strings by an absolute Church; but the forest and the prairie offered him an unbridled liberty, which, lawless as it was, gave scope to his energies, till these savage wastes became the field of his most noteworthy achievements.

Canada was divided between two opposing influences. On the one side were the monarchy and the hierarchy, with their principles of order, subordination, and obedience; substantially at one in purpose, since both wished to keep the colony within manageable bounds, domesticate it, and tame it to soberness, regularity, and obedience. On the other side was the spirit of liberty, or license, which was in the very air of this wilderness continent, reinforced in the chiefs of the colony by a spirit of adventure inherited from the Middle Ages, and by a spirit of trade born of present opportunities; for every official in Canada hoped to make a profit, if not a fortune, out of beaverskins. Kindred impulses, in ruder forms, possessed the humbler colonists, drove them into the forest, and made them hardy woodsmen and skilful bushfighters, though turbulent and lawless members of civilized society.

Time, the decline of the fur-trade, and the influence of the Canadian Church gradually diminished this erratic spirit, and at the same time impaired the qualities that were associated with it. The Canadian became a more stable colonist and a steadier farmer; but for forest journeyings and forest warfare he was scarcely his former self. At the middle of the eighteenth century we find complaints that the race of voyageurs is growing scarce. The taming process was most apparent in the central and lower parts of the colony, such as the Côte de Beaupré and the opposite shore of the St. Lawrence, where the hands of the government and of the Church were strong; while at the head of the colony,—that is, about Montreal and its neighborhood,—which touched the primeval wilderness, an uncontrollable spirit of adventure still held its own. Here, at the beginning of the century, this spirit was as strong as it had ever been, and achieved a series of explorations and discoveries which revealed the plains of the Far West long before an Anglo-Saxon foot had pressed their soil.

The expedition of one Le Sueur to what is now the State of Minnesota may be taken as the starting-point of these enterprises. Le Sueur had visited the country of the Sioux as early as 1683. He returned thither in 1689 with the famous voyageur Nicolas Perrot. [Footnote: Journal historique de l'Etablissement des Français à la Louisiane, 43.] Four years later, Count Frontenac sent him to the Sioux country again. The declared purpose of the mission was to keep those fierce tribes at peace with their neighbors; but the Governor's enemies declared that a contraband trade in beaver was the true object, and that Frontenac's secretary was to have half the profits....