A Guide to Men Being Encore Reflections of a Bachelor Girl 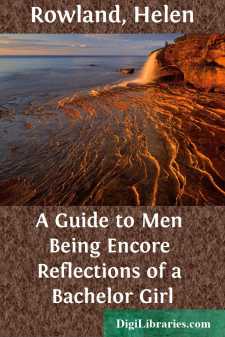 FOREWORD A SMALL phial, I doubt not, could contain the attar of the epigrammatic literature of all time. Few of the perfumes of this diminutive form of wit and satire have survived. Pretty and scented vaporings, most of the thousands and thousands of them, that have died on the air of the foibles of their day.

Yet how the pungent ones can persist! The racy old odors, which are as new as now, that still hover about the political and amorous quips of the Greeks. The nose-crinkling ones of the French, more vinegar-acrid than perfumed, although a seventeenth-century proverb calls France "a monarchy tempered by epigrams." The didactic Teutonic ones, sharply corrosive.

The greatest evaporative of course of this form of bon mot is mere cleverness. Wit is the attar which endures. The wit of Pope and Catullus, Landor, Voltaire, Rousseau and Wilde.

That is what Rapin must have had in mind when he said that a man ought to be content if he succeeded in writing one really good epigram.

Helen Rowland stands pleasantly impeached for writing many. She has a whizz to her swiftly cynical arrow that entitles her to a place in the tournament.

She is not merely anagrammatical, scorns the couplet for the mere sake of the couplet, and has little time for the smiting word at any price.

In the entire history of epigrammatic expression there are few if any whose fame rests solely upon the brittle structure of the bon mot. Martial, about whose brilliant brevities can scarcely be said to hover the odor of sanctity, is, I suppose, remembered solely as a wielder of the barbed word.

Miss Rowland is balanced skilfully upon that same slender trapeze, doing a very deft bow-and-arrow act, her archery of a high order.

She wields a wicked bow, a kindly bow, a swift, a sure, a ductile bow.

Matrimony is her favorite target (so was it Bombo's and Herrick's and even political Parnell had his shot at it) and her little winged arrows are often bitingly pointed with philosophy, satire, wit and sometimes just a touch of good old home-brew American hokum.

For this wise woman with the high-spirited bow behind her arrow, these little pages speak eloquently.

FANNIE HURST.         OVERTURE Would you your sweetheart's secret seek to spell?There are so many little ways to tell!A hair, perhaps, shall prove him false or true—A single hair upon his coat lapel!       PRELUDE THE sweetest part of a kiss is the moment just before taking.

Love is misery—sweetened with imagination, salted with tears, spiced with doubt, flavored with novelty, and swallowed with your eyes shut.

Marriage is the miracle that transforms a kiss from a pleasure into a duty, and a lie from a luxury into a necessity.

A husband is what is left of a lover, after the nerve has been extracted.

A man's heart is like a barber shop in which the cry is always, "NEXT!"

The discovery of rice-powder on his coat-lapel makes a college-boy swagger, a bachelor blush, and a married man tremble.

By the time a man has discovered that he is in love with a woman, she is usually so fagged out waiting for the phenomenon, that she is ready to topple right over into his arms from sheer exhaustion....