A Guest at the Ludlow and Other Stories 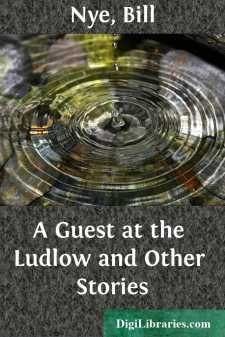 A GUEST AT THE LUDLOW I

We are stopping quietly here, taking our meals in our rooms mostly, and going out very little indeed. When I say we, I use the term editorially.

We notice first of all the great contrast between this and other hotels, and in several instances this one is superior. In the first place, there is a sense of absolute security when one goes to sleep here that can not be felt at a popular hotel, where burglars secrete themselves in the wardrobe during the day and steal one's pantaloons and contents at night. This is one of the compensations of life in prison.

Here the burglars go to bed at the hour that the rest of us do. We all retire at the same time, and a murderer can not sit up any later at night than the smaller or unknown criminal can.

You can get to Ludlow Street Jail by taking the Second avenue Elevated train to Grand street, and then going east two blocks, or you can fire a shotgun into a Sabbath-school.

You can pay five cents to the Elevated Railroad and get here, or you can put some other man's nickel in your own slot and come here with an attendant.

William Marcy Tweed was the contractor of Ludlow Street Jail, and here also he died. He was the son of a poor chair-maker, and was born April 3, 1823. From the chair business in 1853 to congress was the first false step. Exhilarated by the delirium of official life, and the false joys of franking his linen home every week, and having cake and preserves franked back to him at Washington, he resolved to still further taste the delights of office, and in 1857 we find him as a school commissioner.

In 1860 he became Grand Sachem of the Tammany Society, an association at that time more purely political than politically pure. As president of the board of supervisors, head of the department of public works, state senator, and Grand Sachem of Tammany, Tweed had a large and seductive influence over the city and state. The story of how he earned a scanty livelihood by stealing a million of dollars at a pop, and thus, with the most rigid economy, scraped together $20,000,000 in a few years by patient industry and smoking plug tobacco, has been frequently told.

Tweed was once placed here in Ludlow Street Jail in default of $3,000,000 bail. How few there are of us who could slap up that amount of bail if rudely gobbled on the street by the hand of the law. While riding out with the sheriff, in 1875, Tweed asked to see his wife, and said he would be back in a minute.

He came back by way of Spain, in the fall of '76, looking much improved. But the malaria and dissipation of Blackwell's Island afterwards impaired his health, and having done time there, and having been arrested afterwards and placed in Ludlow Street Jail, he died here April 12, 1878, leaving behind him a large, vain world, and an equally vain judgment for $6,537,117.38, to which he said he would give his attention as soon as he could get a paving contract in the sweet ultimately.

From the exterior Ludlow Street Jail looks somewhat like a conservatory of music, but as soon as one enters he readily discovers his mistake. The structure has 100 feet frontage, and a court, which is sometimes called the court of last resort. The guest can climb out of this court by ascending a polished brick wall about 100 feet high, and then letting himself down in a similar way on the Ludlow street side.

That one thing is doing a great deal towards keeping quite a number of people here who would otherwise, I think, go away.

James D. Fish and Ferdinand Ward both remained here prior to their escape to Sing Sing. Red Leary, also, made his escape from this point, but did not succeed in reaching the penitentiary. Forty thousand prisoners have been confined in Ludlow Street Jail, mostly for civil offenses....