A Girl of the People 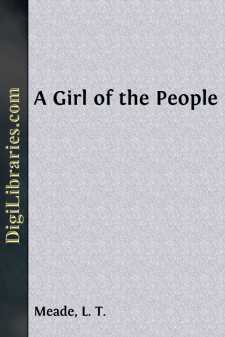 "You have kept us waiting an age! Come along, Bet, do."

"She ain't going to funk it, surely!"

"No, no, not she,—she's a good 'un, Bet is,—come along, Bet. Joe Wilkins is waiting for us round the corner, and he says Sam is to be there, and Jimmy, and Hester Wright: do come along, now."

"Will Hester Wright sing?" suddenly demanded the girl who was being assailed by all these remarks.

"Yes, tip-top, a new song from one of the music halls in London. Now then, be you coming or not, Bet?"

"No, no, she's funking it," suddenly called out a dancing little sprite of a newspaper girl. She came up close to Bet as she spoke, and shook a dirty hand in her face, and gazed up at her with two mirthful, teasing, wicked black eyes. "Bet's funking it,—she's a mammy's girl,—she's tied to her mammy's apron-strings, he-he-he!"

The other girls all joined in the laugh; and Bet, who was standing stolid and straight in the centre of the group, first flushed angrily, then turned pale and bit her lips.

"I ain't funking," she said; "nobody can ever say as there's any funk about me,—there's my share. Good-night."

She tossed a shilling on to the pavement, and before the astonished girls could intercept her, turned on her heel and marched away.

A mocking laugh or two floated after her on the night air, then the black-eyed girl picked up the shilling, said Bet was a "good 'un, though she wor that contrairy," and the whole party set off singing and shouting, up the narrow street of this particular Liverpool slum.

Bet, when she left her companions, walked quickly in the direction of the docks; the pallor still continued on her brown cheeks, and a dazed expression filled her heavy eyes.

"They clinched it when they said I wor a mammy's girl," she muttered. "There ain't no funk in me, but there was a look about mother this morning that I couldn't a-bear. No, I ain't a mammy's girl, not I. There was never nought so good about me, and I have give away my last shilling,—flung it into the gutter. Well, never mind. I ain't tied to nobody's apron-strings—no, not I. Wish I wor, wish I wor."

She walked on, not too fast, holding herself very stiff and erect now. She was a tall girl, made on a large and generous scale, her head was well set on a pair of shapely shoulders, and her coils of red-brown hair were twisted tightly round her massive head.

"Bet," said a young lad, as he rushed up the street—"ha-ha, handsomeBet, give us a kiss, will ye?"

Bet rewarded him with a smart cuff across his face, and marched on, more defiant than ever.

As she paused at a certain door a sweet-looking girl with a white face, dressed in the garb of a Sister, came out.

"Ah, Elizabeth, I am glad you have arrived," she said. "I have just left your mother; she has been crying for you, and—and—she is very ill indeed."

Bet pushed past the girl almost rudely, and ascended the dark rickety stairs with a light step. Her head was held very far back, and in her eyes there was a curious mixture of defiance, softness and despair....